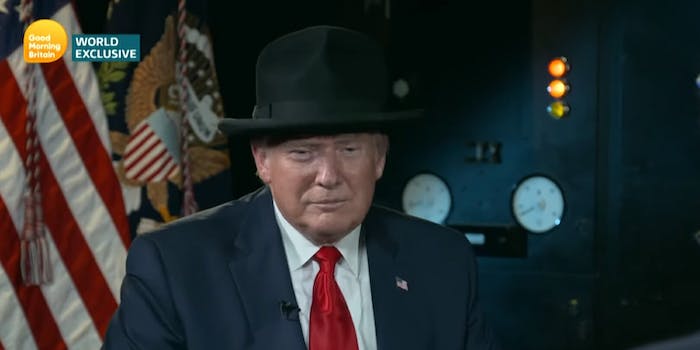 The president didn't seem too enthused about it at first, but went along with the bit.

President Donald Trump wore a hat gifted to him by Piers Morgan on Tuesday, but didn’t appear too enthusiastic about the whole ordeal at first.

When Morgan revealed that the gift was a hat similar to the one worn by former United Kingdom leader Winston Churchill, Trump called it “beautiful.”

Before trying it on, Trump told Morgan that “one thing I’ve proved by being a politician—it is my hair” before refusing to name who he thought the “British Trump” would be. The president joked, “I don’t want to destroy anybody’s career.”

But soon the president went along with the bit. Trump eventually tried on the hat, calling it “a little big.”

After seeing how he looked in the hat, Trump said simply:

“I think Winston looked much better.”

The interview came as Trump continued his state visit to the United Kingdom. The trip has seen the president face protests.  Members of his family and administration were also booed by crowds.

You can watch all of Trump’s interview with Morgan here.