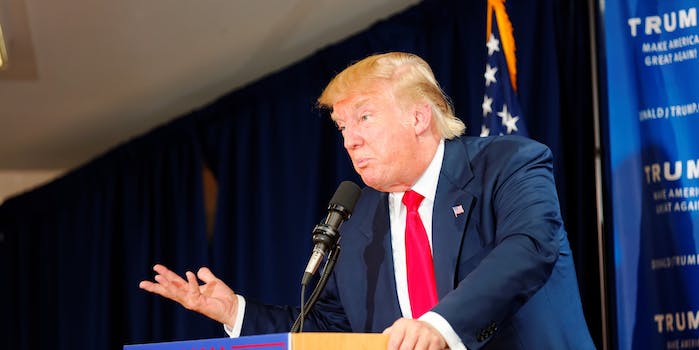 Trump appears to have sided with WikiLeaks over U.S. intelligence.

President-elect Donald Trump appears to think WikiLeaks‘ founder Julian Assange is right on the money. The U.S. intelligence community? Not so much.

In a series of tweets posted Wednesday morning, Trump repeated Assange’s assertion that neither Russia’s government nor any other state actor provided WikiLeaks with emails stolen from the Democratic Party or Democratic operatives.

Trump has consistently questioned Russia’s alleged involvement in the cyberattacks and subsequent leaks of tens of thousands of emails.

Sr US intel official tells @NBCNews that heads of NSA, CIA, FBI & DNI are scheduled to brief Trump Friday, as was always the plan. https://t.co/k0IFbe2SUw

Assange has consistently claimed that Russian government operatives are not WikiLeaks source for the stolen Democratic emails. However, it remains unclear how WikiLeaks obtained the documents or if WikiLeaks’ source could have obtained the documents from the Russian government. Assange has also not denied Russia’s alleged involvement in hacking the Democrats. WikiLeaks has not responded to the Daily Dot’s requests for clarification on these details.

In later tweets, Trump repeated the claims of some U.S. officials who say the Republican National Committee avoided the same fate as its Democratic counterpart by employing better security measures.

things they did and said (like giving the questions to the debate to H). A total double standard! Media, as usual, gave them a pass.

Trump won the election on Nov. 8. He will be sworn in as the 45th president of the United States on Jan. 20.