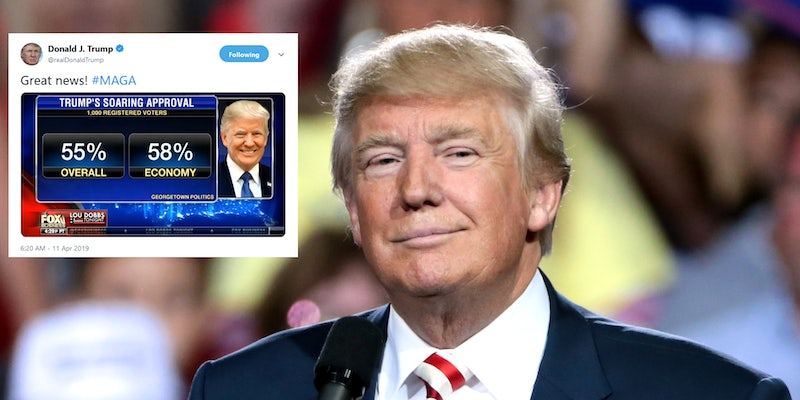 President Donald Trump shared a screenshot of a graphic that inaccurately depicted what a Georgetown Politics poll found his approval rating to be.

However, the graphic does not represent what was found in the poll.

The 58 percent approval rating on the economy shown in the graphic does accurately show what the poll found.

The discrepancy between the graphic shared by Trump and the actual findings were pointed out by people on Twitter–including Mo Elleithee, the director of Georgetown’s Institute of Politics & Public Service, which released the poll.

I’m the Director of @GUPolitics & this graphic is incorrect.

The Battleground Poll shows 58% approval on the economy.

The 55% number is the President’s unfavorable rating. (Only 40% favorable.)https://t.co/a00b6ljiJl https://t.co/nntXuHaUKj

Have to fact check this graphic

Yes, the @GUPolitics poll found a 58% approval for Pres Trump on the economy

BUT…that # on the LEFT is not correct.

This graphic is only half right.

Real Clear Politics, which takes an average of a number of polls, shows the president with a 43.2 approval rating and 52.7 disapproval rating.