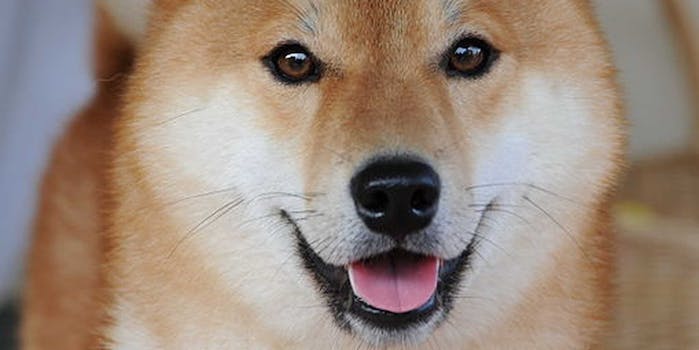 Dogecoin doesn’t need venture capitalists to get to the moon, says co-creator

Guess what venture capitalists of the world? Dogecoin doesn’t need your stinkin’ money to get to the moon.

As Techly reports, Dogecoin co-creator Jackson Palmer told a meet-up of Dogecoin enthusiasts in Sydney, Australia, that he has turned down multiple $500,000 dollar offers from venture capitalists to invest in the group behind the rapidly growing virtual currency.

?I’ve been approached by VCs lately who want to cash in on this Dogecoin thing and they’re offering me what in reality is ridiculous amounts of money,” Palmer told Techly. ?And I’m sitting there quietly with them saying ‘I want to throw X amount of dollars at this’ and I’m like, ‘take a step back, it’s a dog on a coin’. Has the world gone mad?”

In a follow-up interview with The Next Web, Palmer explained that accepting a large funding offer would likely have the counter-productive effect of centralizing Dogecoin, when the true potential of the currency rests in its famously active community of boosters.

?I really think Dogecoin’s strength is that it belongs to the community that has brought it this far. It’s the internet’s currency, and doesn’t rest in the hands of any one person or entity,” Palmer told The Next Web. ?I guess the argument of VCs is that taking investment could assist in the growth of the currency–but the fact is that the bulk of its growth comes from the community and not the small core team we maintain for official projects like charity sponsorship. I’m fairly confident in the moon trajectory the community has set, and I believe in them.”

In an online ecosystem with hundreds of competing cryptocurrencies—from Bitcoin to Kim Coindashian—Dogecoin distinguishes itself by its high transaction volume. On any given day, the value of all the Dogecoins being traded back and forth through the currency’s transaction network is far higher than the total value of all the Dogecoins currently in existence—meaning single Dogecoins are typically being traded multiple times per day.

The reason for this free flow of Dogecoins, which helped send the Jamaican bobsled team to the 2014 Winter Olympics in Sochi, is that the value of a single Dogecoin is only a fraction of a penny. The combination of Dogecoin’s bargain basement exchange value and the fact that the entire endeavor is based around a nonsencial meme, has created an irreverent culture that places a high value on generosity. Largely using automated bots on social networks like Twitter and Reddit, Dogecoin aficionados have taken to using the currency as a way to tip others online.

It’s akin to liking someone’s status update on Facebook or upvoting a comment on Reddit—except, in this case, those pretend Internet points can then be used to purchase a cup of coffee.

Palmer told Techly that it’s in this capacity that his creation has the most potential. “I honestly think…[Dogecoin is] on its way to becoming the currency of the internet,” Palmer predicted. ?I don’t think you’ll be buying cars, yachts, houses with this stuff, but micro transactions based off social media. Damn. That’s where it’s at.”

While the most-prominent figure in the Dogecoin world, whose day job is as a product manager at Adobe, has shrugged off offers of investment, many people operating in the universe of Bitcoin have been much happier to accept entrants from Sand Hill Road and beyond.

Late last year, a number of high-profile deals demonstrated how the venture community is bullish on Bitcoin (at least during the period of time late last year when its price was rocketing into the stratosphere). The biggest deal was Bitcoin wallet service Coinbase’s $25 million cash infusion from Silicon Valley VC Andreessen Horowitz.