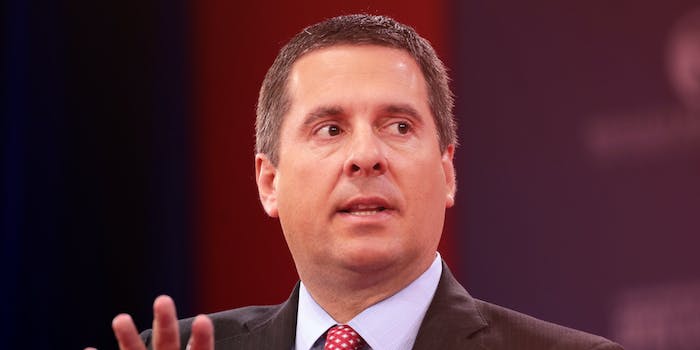 Nunes will step down by the end of the year.

Nunes will leave his post by the end of the year.

In a statement, Nunes said he’d been “presented with a new opportunity to fight for the most important issues I believe in.”

“Rest assured, I have not, by any means, given up our collective fight—I’ll just be pursuing it through other means,” he concluded.

(Nunes is presumably not referring to his personal fight against Twitter parody accounts of his cow and mother.)

Truth Social is set to launch next year. Already it’s been mired in controversy and embarrassment. Mere hours after Trump announced the upcoming launch in October, it collapsed under the weight of troll accounts and memes of a pig defecating on its testicles.

On Dec. 1, Truth Social missed its self-imposed deadline to launch a public-facing beta version of the site.

DWAC is a type of shell company known as a SPAC (special purpose acquisition company). It didn’t reveal the thrust of the investigation, NPR reports.

Nunes’ term doesn’t expire until 2023. His decision to step down a year early caused some speculation, particularly as he’s in line to chair the powerful Ways and Means Committee in the event of Republicans taking the House in the midterms.

QAnon conspiracy theorists speculated that the move has something to do with Trump releasing “DECLAS,” or declassified material. Nunes was intimately involved with Trump’s defense against the congressional probe into Russian interference in the 2016 election.

There’s no reason to believe this is true.

It’s more likely that Nunes’ decision to resign was based at least in part on California’s new congressional district maps. The Fresno Bee reports that under the proposed map, Nunes faces a much more difficult path to reelection than in years past. Even in the Republican-leaning district, in recent years he’s spent increasingly large sums on campaigns and won by narrower margins.

Many reacted to the news with amusement. “You mean the same company the feds are investigating?” tweeted @DavidKellyTN, referring to Truth Social.

“Devin Nunes has long been an embarrassment to California,” the California Democratic Party tweeted. “It’s only fitting that he now leaves Congress to debase himself even further to Donald Trump.”

Some wondered whether he’s qualified for the job. “Who knew Nunes had the expertise to run a billion dollar media [company],” tweeted @WendySiegelman.

While it is true that he doesn’t have a background in tech, this isn’t Nunes’ first foray into media. In 2018, he briefly ran his own personal conservative news site.

A special election will be held next year for Nunes’ vacant seat.