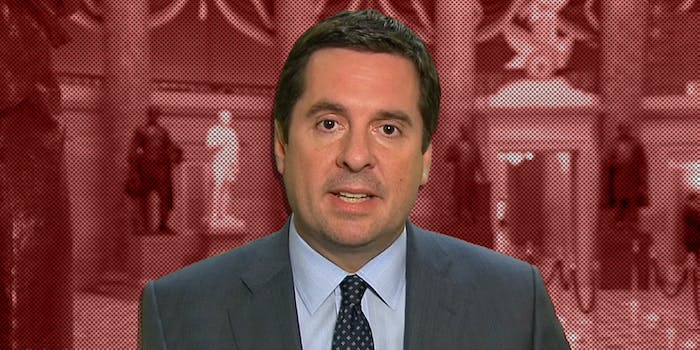 All the news that's fit to print... according to Devin Nunes.

California Republican lawmaker Devin Nunes is no stranger to controversy or critical news coverage. This might explain why he’s reportedly gotten into the news business himself. As Politico detailed on Sunday, Nunes’ campaign committee is bankrolling a conservative website under the title “The California Republican,” as is made clear in tiny text at the bottom of the website.

The site, which promotes Nunes’ recent controversial hobby horse effort to “release the memo,” also reportedly includes conservative news and analysis that has nothing specific to do with him. True to form for the modern GOP under Trump, the site includes stories attacking CNN for “fake news”—including one example that attacks Democratic California lawmaker Ted Lieu, accusing him of making a “fool” of himself.

Whoa – Devin Nunes creates his own alternative news site – was classified on Facebook as a news/media https://t.co/B8wePmeZyA via @politico

On Sunday morning, the website was down due to an internal server error.

On Monday, the original URL redirected to the California Republican’s Facebook page, where it’s labeled a news/media page.

It’s clear from Nunes’ recent statements that he feels victimized by the mainstream press. He recently told right-wing radio host Rush Limbaugh that “almost every story that runs about me is fake” and derided the Washington Post’s motto it adopted last year.

“Democracy does die in darkness. The problem is, is the darkness is emanating from the mainstream media themselves,” Nunes said, according to Politico. “I mean, they refuse, they absolutely refuse to cover the truth. They don’t want to cover it.”

Nunes’ office refused to comment to Politico regarding the website, instead offering a testy reply accusing the outlet of trafficking in “fake news” about the representative. Andrew Janz, a Democratic challenger for California’s 22nd congressional district House seat, blasted Nunes with multiple claims of fakery. “He’s got fake memos, fake websites and fake news,” Janz told Politico. “It’s disappointing to see a member of Congress, especially one who chairs an important committee, spread misinformation to his constituents, who he knows will just eat it up.”

Lieu chimed in, as well.

This is pretty funny. Rep @DevinNunes is now PAYING for a fake "alternative news" site to…attack folks like me.

Hey Devin, feel free to call me names because I'm cool like that.

But at least I actually read underlying documents before writing memos based on those documents. https://t.co/uUHMS7CMQ2

Nunes, 44, stirred major controversy when he pushed for the release of a memo accusing the FBI of improper behavior in acquiring a FISA warrant for former Trump campaign adviser Carter Page. The memo’s release was opposed by the FBI and congressional Democrats, citing national security concerns, but it was approved by the White House. Democratic lawmakers have since contested and rebutted a number of the memo’s central allegations, and the Trump White House has blocked the release of a memo responding to Nunes’ claims.