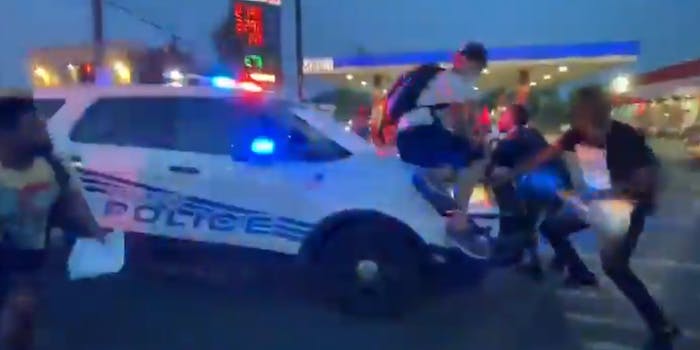 The video sparked a response from Rep. Rashida Tlaib.

A video showing a Detroit police SUV slamming into a group of protesters on Sunday night has sparked a response from at least one member of Congress.

The video, posted on Sunday night by Twitter user Ethan Ketner, shows a group of protesters chanting “no justice, no peace” while surrounding a police SUV. Suddenly, the police car starts driving into the crowd, causing protesters to be thrown onto the hood of the car.

After driving a few feet, the car seems to stop and accelerate several times, pushing protesters off the hood. The video shows people screaming for the car to stop.

Protests against police brutality and racism have emerged across the country after the police killing of George Floyd.

The video has garnered attention from Rep. Rashida Tlaib (D-Mich.), who called the police’s actions “outrageous.”

“This is outrageous. Our city fought hard to have an elected commission to oversee abuse and misconduct by police. Detroit Board of Police Commissioners: I hope you understand the gravity of this, especially if not fully investigated, documented and addressed,” Tlaib posted early Monday, linking to a tweet with the video.

One of the protesters at the scene, Jae Bass, told the Detroit Free Press the police were blocking marchers from entering a park.

As they attempted to go past the police, the cars began moving, Bass told the newspaper, and he and other protesters stood in front of the car until the crowd got out of the way.

“In response to that, he just floored it,” Bass told the Free Press. “He went super fast. Me and a couple of other organizers that were with me, just went flinging off. We went flying off. He ran over a couple people’s arms, feet. He ran over [a] phone. I think I was the last person on the car. I was just holding onto the car. I could feel him speeding up and then he did one of these [manuevers] and he flinged me off the car.”

The Detroit Police did not respond to a request for comment by the Daily Dot.