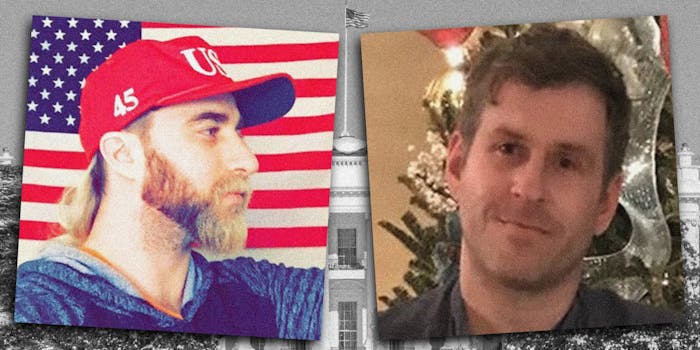 A very public spat between President-elect Donald Trump’s far-right supporters is revealing fractures in the so-called alt-right, and it’s all over who is invited to a celebratory inauguration ball.

DeploraBall, drawing its name from Democratic nominee Hillary Clinton’s campaign trail retort about half of Trump supporters being a “basket of deplorables,” is due to take place on Jan. 19 in Washington, D.C, to honor Trump’s inauguration.

The ball is being organized by a MAGA-3X, a social media group that backed the president-elect during his campaign. The group boasts a “massive, 1,000-person extravaganza” where ticket holders can mix with social media influencers. The event, reportedly, is sold out.

However, bust up erupted between two high-profile event organizers on Tuesday. The first is Mike Cernovich, a pro-Trump social media personality best known for controversially denying the existence of date rape. He generally tries to distance himself from white supremacism and racism, calling himself an American nationalist—a nuance that sits at the heart of what some are calling a civil war within the alt-right.

Cernovich clashed with Timothy Treadstone, another outspoken personality within the alt-right movement who is abandoning an attempted career as a rapper to become a country singer. Treadstone has operated as an activist within a number of so-called alt-right groups, including MAGA-3X, since coming out as a Trump supporter by tattooing “Make America Great Again” on his upper arm.

Cernovich and Treadstone clashed over anti-semitic remarks Treadstone had posted on Twitter the week previous. In a conversation with the Daily Beast, Cernovich said he had told Treadstone at the time that “this wasn’t appropriate and to knock it off.” However, while saying he would stop, Treadstone persisted.

1/ All right here are all the archive links of Baked Alaska's anti-Semitic and white supremacist tweets in one place. If you find more

Treadstone was then very publicly booted from the event and organizing committee and replaced by Milo Yiannopoulos, a Breitbart News writer and well-known figure within alt-right circles. (Disclosure: Yiannopoulos founded the Kernel, a publication the Daily Dot acquired in January 2014.) The move sparked a furious tirade from Treadstone in which he called Cernovich a “cuck” and Yiannopoulos a “shallow scumbag.”

It appears that as the real business of implementing politics comes around the frenzied coalition of trolls and neo-Nazis, once broadly united by the prospect of a Trump presidency in all its populist fervor, is breaking under the pressure. The ideological nuances and compromise of each alt-right faction are evident in varied and emergent post-election goals.

In promotional literature, event organizers explicitly say they are not of the alt-right and coin the media-friendly name “Trumpists” instead, branding themselves as merely “a new type of Republican.”

“This is an event for Trump supporters from across the country, from all backgrounds, ethnicities, and walks of life,” the document goes on. “We will not tolerate any incendiary actions that are discriminatory in nature and/or designed to disrupt the event.”

The break-up between so-called Trumpists—who are trying to shed alt-right extremism in exchange for mainstream favorability—and outright white supremacists—who have leaped scarily closer to relevance—is not a pretty one.

A malleable rebranding of the movement is not on the agenda for those white supremacists like Richard Spencer, who infamously celebrated Trump’s electoral victory with Nazi salutes and cries of “Heil Trump!” His unashamedly racist views have drawn criticism from all over, and Spencer isn’t buying the attempt at inclusivity by so-called ‘Trumpists’— he has instead jokingly has branded them “alt-light.” Spencer, as expected, sided with Treadstone in the latest kerfuffle.

“The ‘alt-light’ faces a major problem,” Spencer wrote in an email to the Daily Beast. “People like Mike Cernovich and Milo don’t have an ideology; they don’t even really have policies that you can point to. They are Trump fans, who are vaguely conservative and a bit neocon-ish. They don’t like feminists and SJWs; in other words, they pick the low-hanging fruit.”

A number of other high-profile alt-right figures sided with Spencer’s take on events, warning against Cernovich’s “‘new right’ (liberal) censorship.”

Meanwhile, backing the ‘Trumpist’ camp, figures like Bill Mitchell, who is a headliner at DeploraBall, weighed in to deny the alt-right civil war narrative altogether.

I don't think any of these racists in my thread tonight are even Trump supporters. They never mention him positively?

Sorry, but combating racists is not "infighting". Racists are not "in" the Trump Movement. He disavows them as do I.