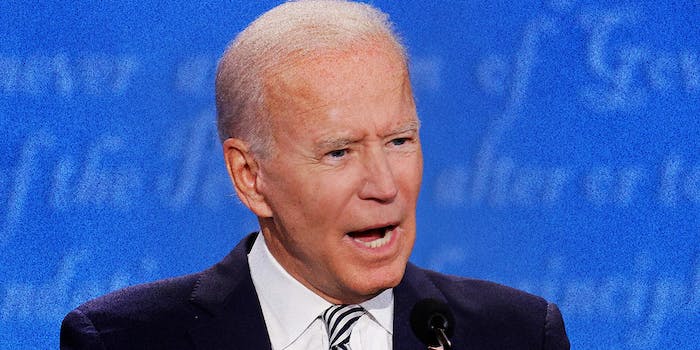 A 2001 bio-terrorist attack simulation known as Operation Dark Winter is being referenced online.

The term was used after Biden and President Donald Trump were asked what actions their administrations would take to combat the coronavirus pandemic. The former vice president argued that Trump had “no clear plan” and that America was headed for a “dark winter” as a result.

Although most Americans heard a perfectly normal term describing our uncertain future, conspiracy theorists heard evidence of a sinister and impending government plot.

Conspiratorial corners of the internet believe Biden was actually referencing Operation Dark Winter, the code name for a U.S. bio-terrorist attack simulation carried out in 2001. The operation, designed by health professionals from the Johns Hopkins Center for Civilian Biodefense Strategies—now known as the Center for Health Security—and the Center for Strategic and International Studies (CSIS), intended to gauge the government’s response to a mock smallpox outbreak linked to an unknown terrorist entity.

“In the debate, Biden said ‘It’s going to be a dark winter,'” said Suzanne Humphries, a conspiratorial author. “Have you looked up dark winter??? I think that slipped out unintentionally.”

Such simulations are commonplace across the public and private sector and often involve multiple government agencies. Countless simulations aimed at testing the country’s defenses against biological and chemical attacks have been carried out for decades.

But in the world of conspiracy theorists, such coincidences don’t exist. Prominent right-wing Twitter users were referencing Operation Dark Winter not long after.

Ian Miles Cheong, a Malaysian commentator popular among U.S. conservatives, alluded that Biden’s use of the term was out of the ordinary.

“I found it curious that Joe Biden referred to ‘Dark Winter,'” Cheong said. “Operation Dark Winter is the code name for a senior-level bioterrorist attack simulation conducted in 2001. It was designed to carry out a mock version of a covert and widespread smallpox attack on the US.”

Cheong also said it was the basis for Tom Clancy’s The Division, a popular video game series. Unfortunately for Cheong, it seems unlikely Biden is a gamer.

Discussion around the phrase only became darker from there. Dozens of Twitter accounts have since suggested that Biden’s remark is proof that the government is preparing to purposely unleash a biological agent in order to use the ensuing chaos to assert more control, a tactic known as a false flag attack.

The story quickly made its way across social media as well as numerous conspiratorial blogging sites.

“I thought there was something peculiar about Joe Biden choosing the phrase ‘Dark Winter’ during the debate last night,” the popular conspiracy theorist @DigitalAsset17 said. “Maybe his handlers told him to say it for a specific reason?”

In reality, Biden is far from the first person to publicly use the term to describe the upcoming season. Everyone from psychologists to foreign government officials have warned repeatedly that the pandemic could lead to a “dark winter,” with citizens locked inside due to the virus and cold.

With Trump falling behind in the polls just days away from the 2020 election, conspiracy theories surrounding Biden will undoubtedly intensify in the days to come.