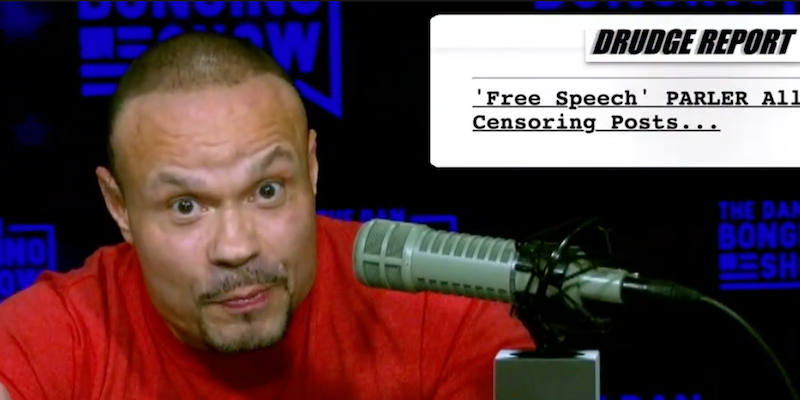 Dan Bongino lashes out at Matt Drudge over Parler drama

Right-wing commentator Dan Bongino has lashed out at Matt Drudge, the founder of the influential news aggregator Drudge Report, over his coverage of the social media app Parler.

A Newsweek article carried by the site on Tuesday detailed reports that Parler, which touts itself as a free-speech alternative to traditional social media sites, had censored a hashtag created by supporters of President Donald Trump.

Although the article merely pointed to allegations made by users and never argued that censorship had been purposely carried out by the site—which Bongino personally invested in earlier this year by purchasing an ownership stake—the Fox News contributor blew up over the coverage.

“The biggest moron of all, who’s still got a big microphone, the morons at Drudge Report,” Bongino stated on his Wednesday podcast. “Drudge the human waste repository, the guy who would—the website seriously that would sell out their dogs to make a buck.”

Conservatives, including Trump, have expressed outrage at Drudge over recent months for failing to defend Trump as vigorously as they do. Bongino also launched in late 2019 “The Bongino Report” in an attempt to take on Drudge.

Bongino delved further into his complaints over Drudge in remarks on Twitter in which he accused the newsmaker of being a “sell out & a fraud.”

“Matt Drudge is human garbage. He’s a sell out & a fraud without a shred of dignity or ethics,” Bongino wrote. “He’d sell his dog to the highest bidder if he could make a buck. He’s running w/a KNOWINGLY false story about Parler, invented by leftists, to stop Parler from growing. Matt IS the enemy.”

The article from Newsweek includes a statement from Amy Peikoff, a member of Parler’s policy team, in which she alleged that the issue had been caused by an error and not censorship.

Ironically, the Drudge Report on Wednesday also linked to a Daily Dot story debunking the viral claim that Parler had been hacked, a fact that seemingly runs contrary to Bongino’s theory that Drudge is purposely amplifying inaccurate claims to “stop Parler from growing.”