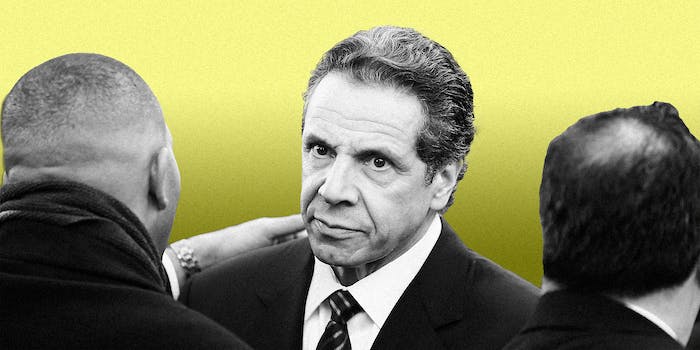 Why are people calling on Cuomo to resign over sex scandals and not nursing home deaths?

People have more to say about him sexually harassing women than facilitating thousands of nursing home deaths.

A third set of allegations have heightened calls for New York Gov. Andrew Cuomo (D) to resign over reports of sexually inappropriate behavior with women, including subordinates.

The accusations, damning though they are (one was captured on camera), shouldn’t be the first choice to oust the Democrat who was so extraordinarily popular last year that he won an Emmy for his press conferences. “Cuomosexuals” was even a, albeit cringey, thing.

To many, Cuomo should already have resigned over the nursing home COVID-19 scandal.

The COVID-19 pandemic made Cuomo a star. He became so enamored of his own glitter that he actually wrote a book about what a great job he did handling it.

A year later, it turns out that much of Cuomo’s shine was tinsel, not gold.

It’s recently been revealed that more than 9,000 people with COVID-19 in New York were sent to nursing homes to recover, potentially leading to thousands of deaths. Cuomo also hid data about the true number of nursing home deaths, which he has admitted.

So the question on many minds is: Why are there more strenuous calls on him to resign over sexual harassment allegations than actually causing people’s deaths?

Conservative pundit Ben Shapiro is of the conspiracy-minded sort. He tweeted that he believes it’s a “pure misdirect from the fact that [Cuomo] should be tossed (and perhaps prosecuted)” over his pandemic policy and coverup.

Others have thoughts about why media seems more willing to cover his sexual harassment scandal than the thousands of dead New Yorkers who lived in nursing homes.

“Interesting that sexual harassment is the @NYGovCuomo scandal the media is comfortable covering — not his mass slaughter of seniors or the subsequent cover-up,” tweeted Tom Elliot of news aggregator Grabien media.

Cuomo’s fall from grace has been particularly embarrassing for whose who gushed praise for him last year. The Daily Beast’s Molly Jong-Fast penned a mea culpa excoriating herself, called “My Cuomo ‘crush’ turned out to be Stockholm Syndrome.”

“Headline aside, the piece was extremely bad and not good at all,” she wrote of a piece she wrote for Vogue last year, titled, “Why we are crushing on Andrew Cuomo right now.”

Some Cuomo defenders remain unmoved, of course. A few believe that the scandals are part of a conspiracy to take him down.

“This is a hit job on Cuomo by [former President Donald] Trump and [Roger] Stone,” tweeted one. “Because NY is about to indict his entire mobster family!”

On the same token, conservatives are blasting liberals who attacked Supreme Court Justice Brett Kavanagh during his confirmation but have chosen to remain silent about Cuomo.

Cuomo is thus far refusing to resign over either set of allegations.