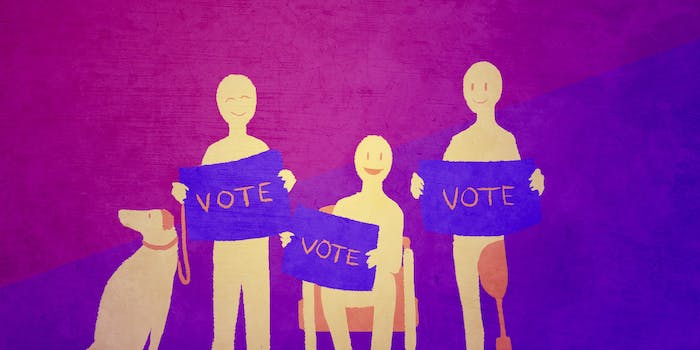 #CripTheVote isn't just for disabled people—it's for all Americans.

Disabled people make up 20 percent of the population, but in 2012, just 15.6 million of them turned out at the polls, according to a report from Rutgers, despite the fact that social policy has a huge impact on the lives of disabled people across the United States.

This year, the #CriptheVote campaign aims to change those voter turnout numbers, using a lively online campaign to engage disabled voters and encourage them to play an active role in the electoral process.

I sat down with Andrew Pulrang, Gregg Beratan, and Alice Wong, the founders of the initiative, to talk about their work and what they hope to see in the 2016 election.

“We started talking about #CripTheVote in late 2015, early 2016,” says Beratan. “The disability community was already focused on the presidential campaign, but the presidential campaign wasn’t focused on us. We’d had a ridiculous number of debates and campaign events, and the only mention of disability was a candidate mocking a disabled reporter.”

The nonpartisan effort aims to simply provide information about voting, the candidates, and policy issues, allowing disabled people to make informed decisions at the polls. Like RespectAbility, another nonpartisan group taking a very prominent role in advocating for disability issues this year, #CriptheVote is pushing candidates to address the concerns of disabled constituents, not trying to shape the electoral outcome itself. As part of its work, the group hosts regular Twitter chats on subjects like polling place accessibility, mass incarceration, disability policy, and youth.

“While #CripTheVote is focused on disability-related issues, we know that these issues impact diverse disabled populations differently,” Wong says, explaining the diverse subject matter they cover and the intersectional approach to their chats. “Every campaign or movement should be intersectional if it wants to have a deeper examination of how policies play out in the lives of multiply marginalized people who aren’t seen or heard enough.”

Wong adds that the chats “are a way to broaden the discourse and highlight the complexity of our issues,” and to bring issues like “sexism, racism, ableism, homophobia/transphobia within the community” to the forefront.

“If we don’t acknowledge these axes of oppression, we’ll lose out on an opportunity to truly listen and learn from the entire spectrum of the disability community,” Wong says.

“#CripTheVote needs to represent the interests of the entire disability community,” adds Beratan, reflecting concerns among many disability activists that the movement tends to focus on white, male disabled people. #CriptheVote prominently addresses issues like the intersection of race, poverty, and disability, along with the needs of the LGBQT disability community and disabled women.

Alongside groups like RespectAbility and ADAPT, #CriptheVote isn’t just getting disabled voters more engaged. It’s also pushing political candidates and parties to take disability issues seriously. “Campaigns have gotten a bit more specific about disability issues,” Pulrang, who has previously written about disability issues for the Daily Dot, explains. “And they have added ‘new’ issues to the positions they had already laid out, which were mostly fairly generic issues that have been around for a long time, like ‘enforcing the ADA.’ On the Democratic side at least, they have responded to grassroots interest in the sub-minimum wage and the Disability Integration Act, which were simply not on their radar screens before.”

However, Beratan notes, “there is still so much more they need to engage with. We’re far from satisfied with what we have heard from either party. We’d love to hear from more campaigns and see more of a dialogue between the parties and the disability community.”

While many nondisabled people aren’t aware of it, disability touches their lives. It’s not just about having disabled friends and family members or the chances of becoming disabled themselves later in life, either. Poor social policy results in wastage and misapplication of funds targeted at the disability community. It leads to accessibility issues, with many spaces, including polling places, still retaining significant barriers that make them difficult to navigate for wheelchair users and people using mobility devices.

Polling place accessibility is a big concern for #CriptheVote. In the Rutgers report, the researchers found that over 30 percent of disabled voters reported problems at the polling place. “We’ve heard about inaccessible caucuses and polling places, voter ID being used to make it more difficult to vote, people not being sent their mail-in ballots on time, and people being forced to use provisional ballots. It seems that voter suppression is combining with the weakening of the Voting Rights Act, and disabled people and others are bearing the brunt of it,” says Beratan.

Pulrang adds that “disabled people we hear from in #CripTheVote are more aware that the problems they face aren’t some natural consequence of their disabilities, but are unjust barriers that don’t have to be there, and should not be there,” highlighting the effectiveness of decades of disability advocacy work. While the nondisabled community may think of accessibility as “special treatment,” disabled people view it as a basic right, for they too should have the ability to engage freely with society. That includes the ability to vote.

While Pulrang—along with many researchers—laments that the government doesn’t track disabled voter participation, anecdotally, the #CriptheVote organizers are definitely seeing an encouraging response from the disabled public. Beratan says that: “It’s been wonderful seeing people posting pics of themselves at their polling places with their ‘I voted’ stickers. I get the sense from many that the movement has led them to see political participation as something they’re not only doing for themselves but in support of the entire disability community.”

While all three organizers make it clear that they can’t take all the credit for disability engagement with the 2016 election, or for a growing interest in disability issues among the campaigns, they’re finding the response to #CriptheVote encouraging. Pulrang points out that many participants are interested not just in voting, but in becoming delegates, working for campaigns, and playing a proactive role in shaping policy. “The top issue” in a survey the group conducted, he says, “was really about inclusion in government. We want disabled people in decision-making positions throughout government, which is why again, there’s so much concern about barriers to participation ‘lower down’ in the campaigns.”

Without tracking disabled participation at the polls, it’s hard to get a firm grasp on the full impact of the #CriptheVote campaign, but it’s definitely making a splash on Twitter. For a group that’s often invisible and ignored, that’s a huge cultural shift, and one disability rights activists hope to keep building on.