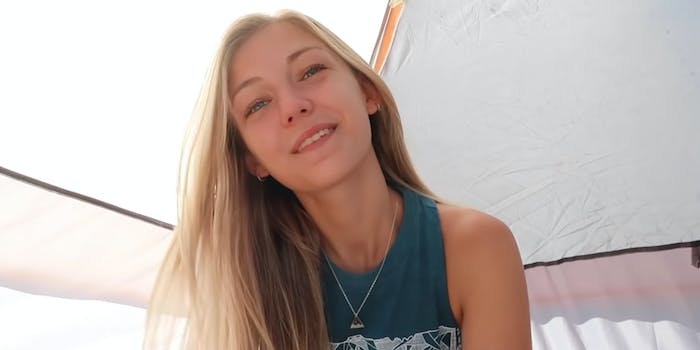 Here is this week's 'One Dumb Conspiracy' newsletter.

Conspiracy theorists are claiming that 22-year-old Gabby Petito, the woman recently found dead following a cross country trip with her fiancé, was a “crisis actor” after learning that she had appeared in a music video relating to the 2012 Sandy Hook school shooting.

Petito’s case garnered widespread attention after her partner, Brian Laundrie, returned from Wyoming to Florida without her. Petito’s body would later be found in a forest in Wyoming on Sept. 19. A preliminary autopsy would label Petito’s death a homicide.

Laundrie, who was named a person of interest in the case shortly after, has since vanished after allegedly going hiking in a forest preserve on Sept. 14. The FBI has since issued a warrant for Laundrie’s arrest on charges related to debit card fraud.

The case has seen numerous twists and turns, including the appearance of Duane Lee Chapman, the television personality known best as “Dog the Bounty Hunter,” who has vowed to find Laundrie.

Petito’s death already sparked numerous conspiracy theories, including many who called her a “crisis actor.” At the time, conspiracy theorists tied her death to the Arizona election audit, saying her then-disappearance was a distraction from it.

But after media reports mentioned a music video from 2013 in which a 14-year-old Petito would promote gun violence awareness, the conspiracy continued to spread. The music video, called “Irreplaceable” was made by musician Deb Hanson in response to the Sandy Hook Elementary School shooting. Petito’s stepbrothers also appear in it.

While the video to most was a sad reminder of the innocent life lost, conspiracy theorists viewed the 8-year-old clip as proof of an ominous plot.

What is the future of HBCU football?

HBCUs have been underfunded for decades. But the question remains: how can schools start to course correct against systematic inequality? For Jackson State head coach and football legend Deion Sanders and his allies, the answer isn’t so clear cut. Can Sanders and his cadre of like-minded coaches pave a positive future for HBCU football?

In particular, users across social media began suggesting that Petito was actually a crisis actor, a term used by conspiracy theorists to describe someone hired by the government to promote a staged event.

Conspiracy theorists, many of whom don’t believe any children died at Sandy Hook, have long claimed that crisis actors were used in the aftermath of the shooting.

Some users merely insinuated that Petito’s appearance in the music video was suspicious, such as one TikTok user who racked up nearly 500,000 views. Others were more brazen, using hashtags such as #FalseFlag and #CrisisActors on their videos.

Over on Twitter, users aggressively accused Petito of being part of a massive “psy-op” against the public.

“Gabby Petito was in Sandy Hook video… the media is a psy-op,” one user wrote before describing Sandy Hook as “totally fabricated.”

Users on Facebook suggested that the revelation of Petito’s inclusion in the music video was actually part of an elaborate plot to distract the public from something else.

The absurd accusations come just days after Petito’s funeral, where friends and family mourned the loss of the young woman.

The incident is yet another reminder of how callus conspiracy theorists can be despite the suffering it can cause to others.