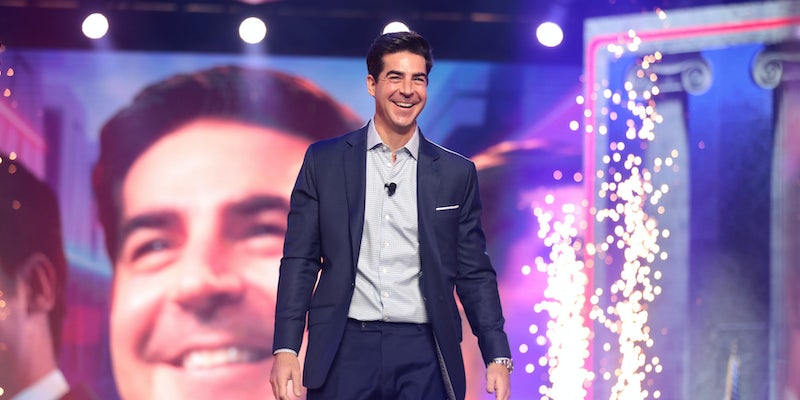 Supporters of the QAnon conspiracy theory believe they were given a secret signal this week from Fox News host Jesse Watters.

In a segment from “Jesse Watters Primetime” uploaded to YouTube on Tuesday, the Fox News host accused what he described as the corporate press of attempting to portray President Joe Biden as a “working class hero.”

“Whatever the corporate media tells you it’s probably just a sales pitch for a product they’re making money from on the back end. I think you know exactly what I’m talking about, don’t you?” Watters said. “China, Pfizer, Facebook, Ukraine, open borders. You follow the money and work back from there.”

Yet while asking his viewers to “follow the money,” Watters, in the minds of QAnon supporters, had drawn out the letter “Q” with his right hand. The alleged reference was seen as validation of the conspiracy theory, which claims, among other things, that former President Donald Trump is secretly working behind the scenes to topple a cabal of child-eating pedophiles.

While it’s unclear who first made the claim, the footage of Watters’ was heavily promoted across Telegram on Friday after being shared by the channel “Christian Patriot News.” The footage has since been viewed more than 79,000 times on the platform.

The claim quickly made its way to Twitter, where users also suggested that Watters’ use of the phrase “follow the money” was another reference to QAnon.

The Daily Dot reached out to Fox News to inquire about the theories circulating online but did not receive a reply by press time.

While there is no evidence that Watters’ segment was aimed at riling up the QAnon base, the Fox News host has previously portrayed the conspiracy theory as legitimate while on air.

During an interview with Eric Trump in 2020, Watters falsely claimed that the movement had been responsible for uncovering numerous scandals that had already been public involving deceased billionaire child-abuser Jeffrey Epstein.

“Q can do some crazy stuff with the pizza stuff and the Wayfair stuff, but they’ve also uncovered a lot of great stuff when it comes to [Jeffrey] Epstein and when it comes to the Deep State,” he said. “I never saw Q as dangerous as antifa. But antifa gets to run wild on the internet. What do you think? What’s going on there?”

The segment was enough to convince several conspiracy theorists who had previously turned against Fox News to give the network a second chance.

“Jesse Watters has a new prime time show on Fox News. I think there’s a reason and I might be able to watch it even though he’s on a fake news network whose censorship is outrageous to We the People,” one Twitter user said. “Watch his subtle air ‘Q’ when he says ‘Follow the Money.’ He’s a White Hat.”

The claim that Watters is slipping QAnon lore into his segments isn’t new. In another segment this week, Watters compared numerous high-profile Democrats to mobsters in the iconic 1972 film The Godfather while also discussing both Bill and Hillary Clinton.

Given that Q has previously mentioned the Clintons as well as the film in posts online, conspiracy theorists were convinced that the connection was undeniable. In reality, QAnon supporters are constantly altering their original interpretations of Q’s posts in order to fit current events.