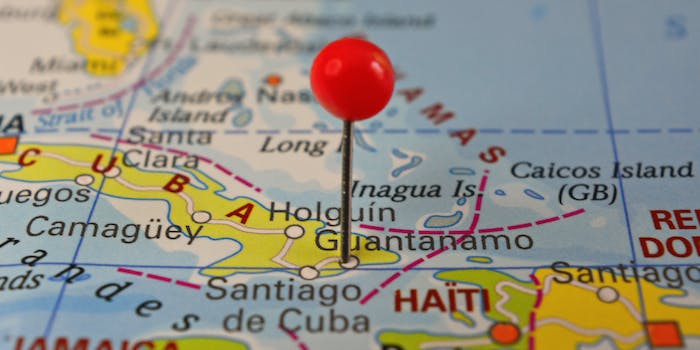 Believers in the QAnon conspiracy theory have been sent into a frenzy after a mundane training exercise was announced last week in Guantanamo Bay.

In a post last Wednesday on Facebook, the account for the U.S. Naval Station at Guantanamo Bay, Cuba, informed followers that the military installation would be “entering a training environment.”

Despite the lack of details, the normally lifeless profile was quickly inundated with hordes of QAnon adherents.

The QAnon conspiracy theory centers around “Q,” an individual or individuals whom followers believe have inside information about former President Donald Trump’s secret battle against a cabal of child-eating pedophiles.

The infamous Q figure, who shared vague messages known as “Q drops” online, went silent after it became apparent that Trump had lost the 2020 presidential election. But even in Q’s absence, the movement has continued to flourish as its followers invent and chase down new conspiracy theories on a weekly basis.

Being able to code is a highly lucrative business skill, but one some people think of as very complex. And while coding can be, the fundamentals are fairly simple to learn. This Skillshare class is designed for beginners and teaches the basics in a way that’s easy to digest. The teachers are positive and encouraging, too. Trade this for your usual post-work Netflix binge and you’ll be coding by the weekend. Yep, it really is that easy. Did we mention the first month of Skillshare Premium is free as well?

Even after years of failed predictions regarding Guantanamo Bay and every other aspect of the conspiracy theory, QAnon believers celebrated the post on Facebook. Many believed that “the storm,” a term used to describe the day when all of Trump’s enemies are brought to justice, had finally arrived.

“The perfect storm has arrived!!!” one user said.

Others celebrated the fact that so many of their fellow QAnon believers had flooded the comment section.

“Happy to see so many AWAKE!!” another user said.

Numerous users also shared the phrase “no deals,” arguing that Trump’s enemies should be executed without hesitation.

Highlighting just how desperate the conspiracy theory has become, one user excitedly insinuated that the post must be proof of the storm because she had seen 17 other comments.

Given that the letter Q is the 17th letter in the alphabet, QAnon followers believe that any reference to 17 is actually a secret signal.

The Facebook post was also widely shared on Telegram, the messaging platform popular among the QAnon movement.

The Daily Dot reached out to the U.S. Navy for comment on the training exercise but did not receive a reply.

Chances are good that the storm didn’t arrive.