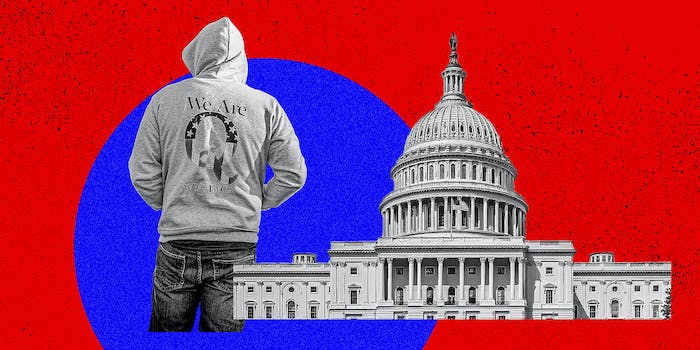 The anger and vitriol that led to Jan. 6 hasn’t dissipated—it’s percolating online more than ever

Never forget how vicious the anger was behind it.

In the leadup to the Jan. 6, 2021 insurrection, leaders in the stolen 2020 election movement had no trouble speaking openly about what they were planning and what they hoped would happen. It’s easy to forget just how charged their rhetoric was in advance of the rally, their words pure gasoline that flooded the lawn in front of the Capitol, ready and waiting for a spark.

In particular, leading promoters of the QAnon movement were both firm and vocal in their belief that then-Vice President Mike Pence had the power to magically wield a non-existent constitutional authority and throw out the electoral college votes of disputed states and anoint President Donald Trump to a second term, where he would get down to the business of wiping out their enemies.

While people remember the distinctive chants of “Hang Mike Pence” echoing from the walls of the Capitol, because of social media bans and many attempting to hide their role in the aftermath of the riot, it’s easy to forget just how vociferous and violent the movement was, openly plotting online, well before Congress was breached.

Through the archived tweets of and responses to major Q promoters, the vast majority of whom have been banned, it’s easy to now see how much of a steady climb the “Stop the Steal” movement was to its spurting, blood-soaked apex. And while Jan. 6 was a culmination, it was not an ending.

The anger is still there, percolating on a surface we can no longer see, as many on the far-right have moved off mainstream platforms.

But the words you see from the days leading to the Capitol riot are still being spoken by a movement hell-bent on usurpation. Read the words leading up to Jan. 6 and know there has been no easement. It just isn’t easy for you to see.

It started with determination. In the days leading up to what Q believers had taken to calling “the Pence Card,” Q promoter tweets held the line—Trump would be president again, a storm was coming, and nothing would stand in the way of Trump revealing every deep state lie—thanks to the support of true patriots. Those patriots were not only prepared to kill for Trump, they were prepared to die. And of course, several of them did.

Any hint of apostasy—even from a top promoter like Praying Medic—was met with howling anger from rank-and-file Trump devotees. No room was given for the plan not working out. It was going to occur, no matter what desperate and violent acts had to be undertaken.

There was a savage whipping up, into a frenzy, of just about every single person online.

But on the morning of the 6, Pence released a letter confirming what anyone with any knowledge of election law already knew: the vice president can’t just throw out electoral votes and decide who the president is.

Legitimate institutions were flexing against a burgeoning anti-government movement. The far-right was determined it could make it buckle. Confusion gave way to betrayal and anger, much of which focused on Pence for not finishing the job. Befitting an insurrection which saw multiple calls for Pence to be hanged, Q promoters took their ire out in an increasingly unhinged series of tweets, with Ron Watkins retweeting a blog post accusing Pence of leading a coup against Trump, and Lin Wood demanding Pence’s arrest for treason.

Wood, at the time, was representing Trump in court in a number of lawsuits relating to the election, a prominent lawyer eager to defy the system, knowing he had an army at his back.

Out of the terror of Trump losing then came unadulterated joy when the riot breached the Capitol and well-known figures in the Q world showed off for the cameras. If this wasn’t the Storm, it was pretty close.

As the shocking day bled into the next week, and the magnitude of what just happened sank in, Q promoters found new determination, with Trump’s Twitter suspension and the banning of other right-wing luminaries “confirmed” their beliefs. Trump wasn’t elected that day but there was little backing down.

Trump, however, didn’t get inaugurated. Instead, elaborate hoaxes were drawn up. The movement, it seems wound up back where they started. You might think that would spell the end of all this.

But one thing that hasn’t been eradicated is their determination.

And it’s in that determination where the QAnon and stolen election movements live on after Jan. 6.

Q remains silent, Trump was never reinstated, and the Q community’s infighting is worse than ever. But they cling to the dream that the deep state will eventually be brought down, 2020 will be “fixed” and the storm will come sometime soon.

Even though they’ve mostly been banned from Twitter, sending all these tweets to the dustbin of the Wayback Machine, Q believers are still out there and haven’t tempered their expectations. So they’ll continue to wait, call for violence against their enemies, occasionally carry it out themselves, and pray that Trump will carry out the purge they’ve spent year after year hoping for.

But the one thing that can’t be forgotten, is that in this movement, the online words always presage action. And the next time will be more violent.