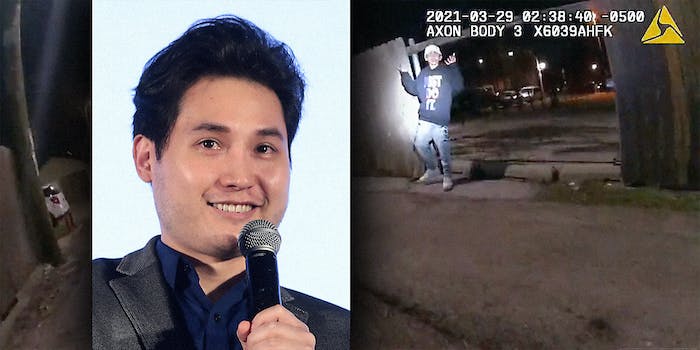 Their takes inspired comparisons to how conservatives described Kyle Rittenhouse.

Thirteen-year-old Adam Toledo was killed by Chicago police in late March. Body camera footage shows that the boy didn’t have a gun in his hand when he was shot.

In spite of his youth and the fact that he wasn’t armed, some on the right are rushing to malign him.

No one will be surprised that far-right troll Andy Ngô is among those gleefully smearing Toledo.

Ngô tweeted a screenshot from the video which appears to show the child with a weapon in his hand and wrote sneeringly of “armed teen, Adam Toledo, who was known in gang circles as ‘Lil’ Homicide’ and ‘Bvby Diablo.'”

It’s not clear whether Toledo was involved in a gang. Either way, gang membership is not an capital offense.

Toledo’s family’s attorney concedes that the boy may have been armed before he turned around and complied with the officer’s command, but insists that he did not have a weapon when he was shot.

“It could be a gun. I’m not going to deny that, that it could be a gun, but I can’t tell you with 100% certainty, until I have that video forensically analyzed and enhanced,” their attorney said, CNN reports. “But it is not relevant, because he tossed the gun. If he had a gun, he tossed it.”

Eric Zorn, a Chicago Tribune columnist, argued that it’s too soon to judge whether the officer was justified in gunning down a literal child. He also cautioned against “romanticizing and infantilizing” the dead boy.

That wasn’t Zorn’s only comment on the matter. In his April 6 column, he presupposed that Toledo and the 21-year-old he was with either pointed a gun or fired at police, and that Toledo was killed when officers returned fire to defend themselves.

That’s not what happened. In reality, officers say they responded to the area after the ShotSpotter technology picked up gunfire. They chased and caught the 21-year-old. One officer pursued and caught up with Toledo, ordered him to stop and turn around with his hands up, which he did, but was killed anyway.

But why wait for the body camera footage, which wasn’t released when Zorn wrote his column, when you can malign a child for his own death?

People didn’t take too kindly to how Ngô and Zorn characterized the slaying.

“You’re a monster, but I suppose you already know that,” Molly Conger replied to Zorn.

“His hands were up when he was shot,” @jimhough16 retorted to Ngô. “You’re dishonestly posting a different pic.” (Misleading takes are kind of Ngô’s thing.)

Their takes, as well as those of Fox News mouthpieces and their lesser-known counterparts, have inspired comparisons to how the same crowd described accused murderer Kyle Rittenhouse, who was 17 when he killed two and wounded a third last year. Rittenhouse was wholeheartedly defended by conservatives.

Many believe that race played a part. Toledo was Hispanic; Rittenhouse and other whites, including racist mass shooters, have been taken alive by police.

Eric E. Stillman, the officer who shot Toledo, has been placed on administrative duties for 30 days.