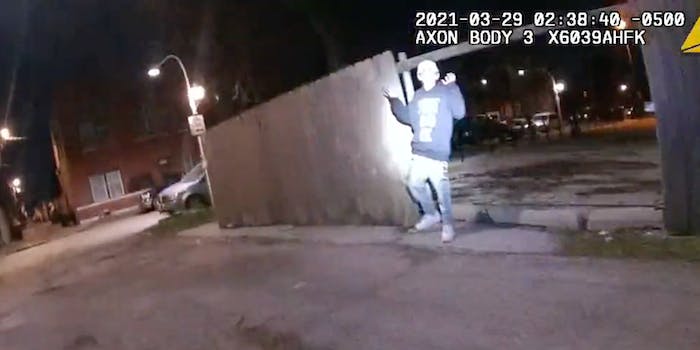 Toledo had his hands up when the officer shot him.

The video shows Officer Eric Stillman driving his car and then hurriedly getting out. He starts running down an alley, brushing past one person on his way, and running past a park.

“Stop! Stop right fucking now!” he screams as he chases after Toledo, who is seen running in the distance.

Toledo stops next to an empty lot, and Stillman slows down as he gets closer.

Toledo pauses by the fence of an empty lot, looks toward Stillman, and raises his hands.

Stillman shoots him as his empty hands are in the air. Toledo jerks back and slumps down on the ground. Stillman runs toward him, and Toledo is on the ground barely moving, his mouth bloody.

“Look at me. You all right?” Stillman asks. He puts Toledo on his back, while Toledo breathes slowly.

Stillman calls for help. Officers and medical personnel eventually arrive at the scene and try to revive Toledo.

The entire incident—from Stillman exiting his vehicle to him shooting Toledo—happened in 21 seconds.

Toledo was pronounced dead at the scene.

The video was released by Chicago’s Civilian Office of Police Accountability (COPA), which is currently investigating the incident.

Police initially claimed that Toledo had a handgun on him. The police were reportedly responding to a shooting in the area that night around 2:30am.

The video is grainy, but some reports claim that Toledo appears to have a gun on him that he threw away before raising his hands to comply with Stillman’s orders. In his bodycam footage, Stillman can be seen later spotting a gun by the fence as he scouts the area.

In the tactical report regarding the shooting, it was alleged that Toledo’s actions included not following verbal direction, fleeing, posing “imminent threat of battery with weapon,” and using “force likely to cause death or great bodily harm.”

As is seen in the video, Toledo eventually stopped running and complied with Stillman’s orders.

The tactical report also alleged that Stillman fired his weapon while trying to defend himself and his colleague as well as “overcome resistance or aggression.”

Toledo’s family reiterated on Thursday that the seventh grader did not have a gun on him when he was killed. Their lawyer, Adeena Weiss Ortiz, said no matter what, he was following orders and should not have been shot.

“If he had a gun, he tossed it. … The officer said, ‘Show me your hands,’ (and Toledo) complied,” she said, according to the Chicago Tribune. “(The officer) is trained to not shoot somebody unarmed. He is trained to look, he is trained not to panic.”

According to the Tribune, there have been complaints against Stillman in the past, but he has never received any punitive measures.

The video comes at a time of renewed scrutiny over police brutality, as the Derek Chauvin trial is underway, and another Black man, Daunte Wright, was killed by police on Sunday.

On Thursday evening, right-wing commenter Andy Ngo came under fire for claiming Toledo was a gang member known as “Li’l Homicide” among his friends. The screenshots Ngo shared did not show any verifiable information. “Li’l Homicide” also trended on Twitter following Ngo’s post, with many right-wing personalities using it as an opportunity to try and justify Toledo’s killing.

However, many were quick to push back on the narrative some were trying to create and compared the police treatment Toledo received to that of Kyle Rittenhouse.

On Thursday, COPA called for “calm and peace” as the footage was being released and said it is continuing with its investigation into the incident.

“COPA is committed to completing a full, thorough and objective investigation of the entire incident which includes not only the officer’s use of deadly force but also the actions of other involved officers leading up to and following the deadly shooting to determine whether each officers’ actions complied with Department policy directives and training,” it said in a press release.