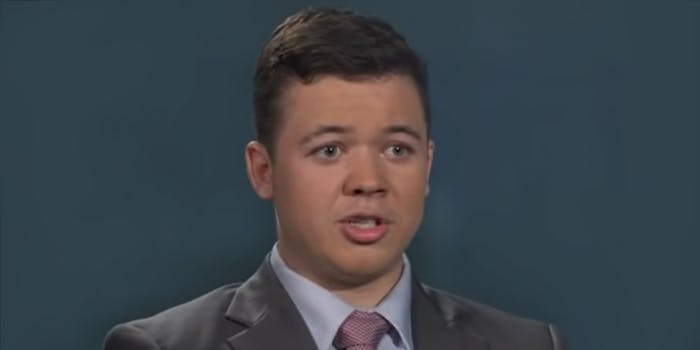 ‘They believe nearly anything’: Satirical news site keeps duping Kyle Rittenhouse fans with updates about his ‘lawsuit’ against ‘The View’

This is at least the third time they've been duped by a satirical site.

Rumors are flying across the internet that Kyle Rittenhouse settled a lawsuit against The View for $22 million and a formal apology. His fans are ecstatic.

It would indeed be huge news if The View agreed to pay $22 million to settle Rittenhouse’s supposed defamation suit. But it’s not true in the slightest. Rittenhouse has never sued The View.

In fact, the rumor came from a satirical website. This is the third time the site has fooled people about Rittenhouse and The View.

Snopes reported on Thursday that claims of a settlement between Rittenhouse and the daytime talk show originated from an article published the day before by USA Taters, part of a network of websites run by the satirical America’s Last Line of Defense. Among the many clues that the story is fake is that it’s bookmarked “weird hero fetish satire.”

“According to our records, the bulk of the attacks against The View come from sites pretending to be right-wing propaganda when actually they’re leftist trolls making fun of Trump supporters,” the piece states.

“None of the lawsuits have been true so far, but this one definitely is. We promise.”

They’ve made Rittenhouse a cult icon for killing two and wounding a third during unrest over the police killing of a Black man in Kenosha, Wisconsin. Rittenhouse was found not guilty of charges associated with the shooting.

They swiftly spread the false claim about Rittenhouse settling with The View all over the internet.

Some of the posts racked up thousands of interactions.

“The view settles with Rittenhouse for 22 million,” @MarkDelao7 tweeted on Wednesday. “What a beautiful thing.”

“Huge: @TheView settles with Rittenhouse for $22 million and a formal apology. Not tired of winning yet,” @realJoelFischer told his 57,000 Twitter followers on Wednesday, adding several crying-while-laughing emojis.

In addition to the above posts on Facebook, Twitter, and Truth Social, the Daily Dot found fake news about Rittenhouse’s windfall circulating on Parler, Gab, and Gettr.

This isn’t the first time America’s Last Line of Defense fooled Rittenhouse’s fans into believing satirical stories about him suing The View.

In November 2021, the Daily Dot debunked a claim that Rittenhouse had filed a $60 million defamation suit against The View cohosts Joy Behar and Whoopi Goldberg.

Fact-checkers traced the fake news back to a piece on Potatriots Unite, another site run by America’s Last Line of Defense.

America’s Last Line of Defense got them again last month. A story on its Dunning-Kruger Times site said a judge had denied a motion to dismiss Rittenhouse’s $25 million lawsuit against Goldberg.

After conservatives latched onto it, USA Today fact-checked the claim as false.

Now America’s Last Line of Defense has once again fooled Rittenhouse fans into believing its satire about a fictitious lawsuit against The View.

America’s Last Line of Defense is the standard-bearer of a network of sites run by Christopher Blair. In 2017, Blair told PolitiFact that his aim is to trick conservatives into falling for content most people wouldn’t believe.

“The good chunk of the population who believe aren’t based in reality,” Blair told the outlet at the time. “They’re the people who buy the National Enquirer. Tucker Carlson doesn’t just get killed, he gets murdered by a blacked-out Ford Explorer.”

“’Taters’ are the conservative fans of America’s Last Line of Defense,” the about us page of Potatriots Unite says. “They are fragile, frightened, mostly older Caucasian Americans. They believe nearly anything.”

“…They don’t understand logic and they couldn’t care less about reason. Facts are irrelevant.”