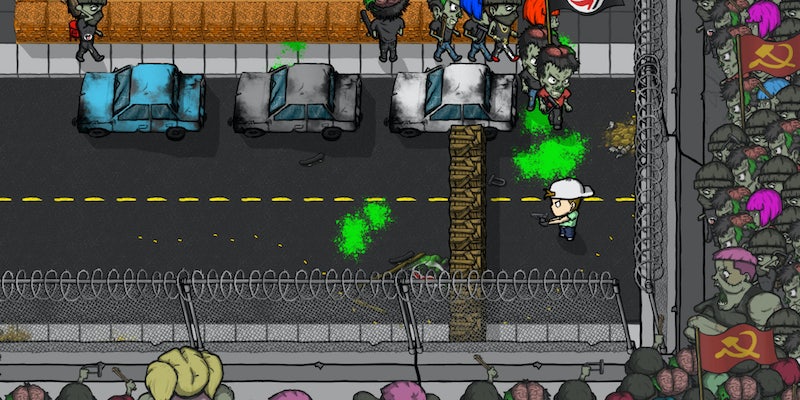 In the videogame embodiment of things no one asked for, a company with ties to far-right extremism has launched a game that lets you play the role of Kyle Rittenhouse shooting your way through hordes of zombies. The game is an obvious attempt to own the libs by making light of Rittenhouse killing two and wounding a third during an unruly civil rights protest in Kenosha, Wisconsin, for which he was acquitted late last year.

The tellingly named Nordic Empire Games created Acquitted, a computer game available on Steam. Acquitted promises people willing to pay $5 for the privilege of shooting zombies in a battle of “self defense vs. the brain dead.”

Nordic Empire Games has said that its game is “inspired by” Rittenhouse, 19, but a more accurate telling is that it’s directly based on him shooting people in Kenosha. The hero wears the same backward hat, gloves, and T-shirt he wore to the deadly protest, and one of his main weapons is a high-powered rifle similar to that which Rittenhouse carried that night. Some of the zombies carry skateboards, the same item one of the men he shot struck Rittenhouse with.

Nordic Empire Games invokes Rittenhouse’s name in many of its posts about Acquitted and has replied to some of his tweets.

It’s not clear whether and to what extent Rittenhouse himself is aware of or involved in the game that features him, however.

Neither Rittenhouse nor Nordic Empire Games responded to emails inquiring about the extent of their relationship and the latter’s purported links to far-right extremism.

Nordic Empire Games isn’t the first to come up with the idea of basing a videogame on Rittenhouse. Six months ago, the satirical conservative site Babylon Bee published an article about the fictitious Call of Duty: Rittenhouse, which “lets you defend your home from a horde of bloodthirsty communists.”

Nordic Empire Games has said it worked on its game for six months. Zombies in the game carry symbols identifying them as communists.

According to its website, Nordic Empire Games is a Swedish company run by three young men. One of the three, William Hahne, has links to right-wing extremists. In a Facebook post about launching Acquitted, Hahne referred to Nordic Empire Games as “my company.”

The identities of the other two men are unknown.

Hahne is co-founder of the far-right political party Alternative for Sweden, which advocates forced repatriation of immigrants and withdrawal from the European Union. Hahne was previously ousted as deputy chairperson of another Swedish political group over allegations of racist statements and leadership collaborating with neo-fascists.

According to its website, Nordic Empire Games is its founders’ attempt to crusade for all that is “right and true.” The site laments the “narratives” infused into entertainment that are “contrary to healthy living and many of the foundational values of Western civilization.”

Nordic Empire Games created a computer game based on Rittenhouse shooting three people and getting away with it.

“We have high ambitions of creating games that push culture in the right direction, and we want to grow organically,” the site says.

Whether it will achieve this goal is up for debate.

Less debatable is whether there’s an audience for such a game.

Rittenhouse is a wildly popular figure on the right. Killing two and wounding a third during protests over the police killing of an unarmed Black man made him a hero to extremists, so it makes sense that a company with ties to the far-right is using him as the central figure in its inaugural game.

Some people are naturally inclined to like anything that lionizes Rittenhouse and demonizes liberals.

Acquitted has already attracted attention from prominent far-right figures such as Andy Ngo, who has posted about it multiple times and discussed it on his show. It was also featured on the Quartering’s popular YouTube show, which described the game as “awesome” and said it “makes leftists go insane.”

A post about the game in a subreddit dedicated to comedian Steven Crowder received 1,400 upvotes and inspired much laughter, although some noted that it’s not likely to have much influence beyond triggering liberals. “Nobody on the left is going to buy it,” observed one. “Anyone on the right that buys it is going to rate it very high just for the lols.”

That’s good enough for some. “I see this as a win,” replied one redditor.

Conversely, some people are appalled that the game exists.

As one reviewer wrote: “Steam needs to remove this racist game RIGHT NOW!”

The game’s arguable poor taste and questions about whether Nordic Empire Games has permission to use Rittenhouse’s likeness might not be to blame should it fail to catch on.

According to a scathing review by the Kotaku, Acquitted’s second worst sin (behind trivializing two deaths) is how abysmal the game itself is.

“Why can’t far-right provocateurs just be good at anything?” it laments.

It goes on to describe the game as “intended to be a provocative celebration” of Rittenhouse’s acquittal that instead is “a very poorly made zombie shooter, without even a glimmer of the courage of its convictions.”

As Kotaku’s review noted, even the incel crowd juicing it with positive reviews has noticed bugs and oversights, such as the lack of Black Lives Matter symbols among the Soviet Union and antifascist signs and flags that adorn the zombie horde. Plus it’s apparently so simplistic as to be rendered unbearably dull.

“There is a range of weapons, but changing them is so unwieldy that it makes far more sense to just stick with the semi-automatic rifle. You just hold down the fire button, it reloads for you,” the review states.