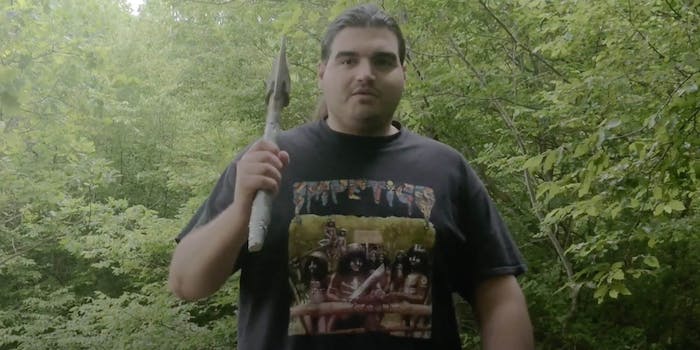 While wielding an ax, the YouTuber criticizes the Catholic church for the annual mass.

A man in Bosnia was reportedly arrested after criticizing the Catholic Church in a video posted to YouTube.

Haris Pendic, a self-described metalhead and anti-fascist activist, decried a recent Catholic mass while wielding an ax in a video for his channel, “The Unstoppable Grind Master.”

The annual mass, which has been held in May for more than 30 years, is used to celebrate pro-Nazi militants who were executed by Yugoslavia’s communist government following World War II. The event is even sponsored by the Croatian Parliament.

The mass appears to be increasingly unpopular, as only 20 people attended. As the event took place, thousands of anti-fascist and Jewish protesters took to the streets in opposition.

Pendic argued in his video, according to Loudwire, that the church should have been hit with a grenade and burned to the ground. Although the YouTuber says a disclaimer is included in all of his videos, noting that they are merely performance pieces, the clip was taken down by YouTube.

The metalhead was arrested not long after and charged with “threatening the security of presidents and the Cardinal of Bosnia’s Catholic Church; and provoking national, racial and religious hatred and discrimination.”

In a statement to Loudwire, Pendic claimed that his video had been reported by “a far-right movement called Urbana Desnica.”

“They called the cops on me and they interrogated me and put me in prison for 24 hours,” Pendic said. “I will now probably face 2.5 years probation for speaking out against fascism.”

The YouTuber went on to accuse local media outlets of distorting the facts of the incident in an effort to discredit him.

“My name is being spread everywhere publicly on all sorts of news and media outlets (mostly right-wing ones and mainstream media platforms) selling lies about me how I am a ‘jihadist’ who attacks all Christians and all Croats,” Pendic added. “The media is lying, the system is corrupt, the fascists are being protected by the state.”

Pendic believes he is being targeted in an attempt to crackdown on activism in the country.

“They do this to me ’cause I am poor and can’t afford lawyers and going to court processes,” the YouTuber said. “That’s why they are destroying my life right now and using me as a sacrificial lamb to instill fear into the people and demonstrate power and show what happens to you if you speak freely against the corrupt fascist state.”