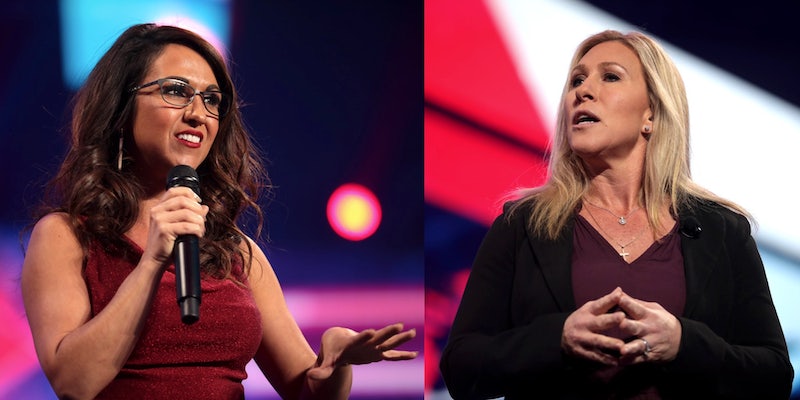 Lauren Boebert and Marjorie Taylor Greene were among the 20 Republicans who opposed the bill.

Members of Congress that have shown support for QAnon voted against anti-sex trafficking legislation on Wednesday despite the conspiracy movement’s purported opposition to such abuse.

The Frederick Douglass Trafficking Victims Prevention and Protection Reauthorization Act of 2022 was nonetheless overwhelmingly approved in the House in a 401 to 20 vote.

The law has been repeatedly reauthorized since first being passed in the year 2000 and introduced strong penalties for perpetrators and support for victims.

High-profile individuals such as Rep. Lauren Boebert (R-Colo.) and Rep. Marjorie Taylor Greene (R-Ga.) are among the Republicans who voted against the bill and are two leading figures who have sympathized with QAnon in the past.

The QAnon conspiracy theory claims “Q,” a team of high-level government insiders, are secretly working with former President Donald Trump to bring down a Satanic cabal of child-eating pedophiles. The conspiracy theory originated on the website 4chan, where “Q” first claimed that former Secretary of State Hillary Clinton would soon be arrested for child sex trafficking.

Boebert famously claimed in early 2020 that she was “very familiar” with QAnon and that she hoped the conspiracy theory was true.

“Everything that I’ve heard of Q, I hope that this is real because it only means that America is getting stronger and better, and people are returning to conservative values,” she said.

Greene in 2017 reportedly referred to QAnon as “a once-in-a-lifetime opportunity to take this global cabal of Satan-worshiping pedophiles out.” The congresswoman has since distanced herself from QAnon but continues to promote conspiracy theories popular among its followers.

Rep. Paul Gosar (R-Ariz.), who has flirted with the QAnon movement in the past, also voted against the anti-trafficking legislation this week.

But it wasn’t just those tied to QAnon who drew attention for their opposition to the bill. Rep. Matt Gaetz (R-Fla.) was also widely criticized given the fact that he is currently under federal investigation for allegedly trafficking a minor across state lines for sex, which he denies.

While Gaetz has not publicly commented on why he opposed the bill, the congressman in 2017 voted no on another anti-trafficking bill. Gaetz argued that the legislation gave the Department of Transportation too much power.