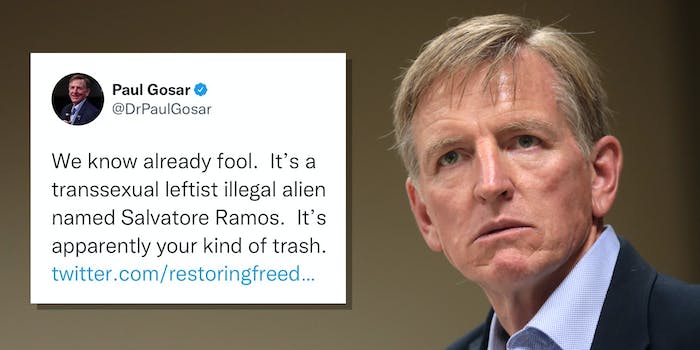 ‘This is sick’: 4chan lie that Uvalde elementary school shooter was trans makes its way to Congress

Gosar deleted the tweet. But the damage was done.

Tuesday saw one of the worst school shootings in United States history to date. A mass shooter killed 19 children and two adults at Robb Elementary School in Uvalde, Texas.

Within hours of the shooting, right-wing figures began spreading a lie that the killer, 18-year-old Salvador Ramos, was a transgender woman. Ramos, who was male, was killed by officers responding to the shooting.

The false rumor reportedly began on 4chan. From there it swiftly made its way to Rep. Paul Gosar (R-Ariz.).

Anonymous users on the troll haven 4chan simply grabbed photos of any trans woman who had a passing resemblance to Ramos and claimed that it was him.

After her photo began being falsely attributed to the shooter, the redditor posted a current photo to definitively establish that it wasn’t her.

The Daily Dot found her Reddit account and matched photos she posted weeks ago to those being circulated by right-wing figures and on platforms frequented by the far-right and falsely attributed to Ramos.

But Gosar took the lie about the shooter’s identity a step further. He falsely claimed that he was both transgender and an undocumented immigrant.

Ramos was an American citizen. There’s no evidence he was transgender.

Gosar deleted the tweet hours later. He hasn’t made a statement correcting the lie.

By then, the damage was done. People are using the lie to spread transphobia.

These lies continued circulating in right-wing circles on Wednesday, long after being debunked. “Probably won’t hear this on CNN,” one person tweeted.

The toxic “politically incorrect” message board on 4chan, where the lie reportedly originated, is littered with posts falsely claiming the shooter was trans, many of which use the redditor’s photos.

Many are disgusted by people such as Gosar weaponizing the shooting in Uvalde to spread lies and transphobia.

“A sitting congressman just spread a lie about the Texas shooter to pin it on transgender people spread by troll sites, in a state where they are spending more time banning trans kids than they are spending regulating guns,” tweeted @ErinInTheMorn. “This is absolutely SICK.”

Even some far-right figures are correcting the record.

On Wednesday, the redditor posted that she’s being threatened and harassed.

“People are threatening me and harassing me for no reason,” she wrote. “They are actively trying to ruin my life instead of helping the families who were affected.”

Multiple people have advised her to lock her account.

But she’s determined not to let the liars win.

“Just another day of being trans, I can handle stupid,” she wrote.