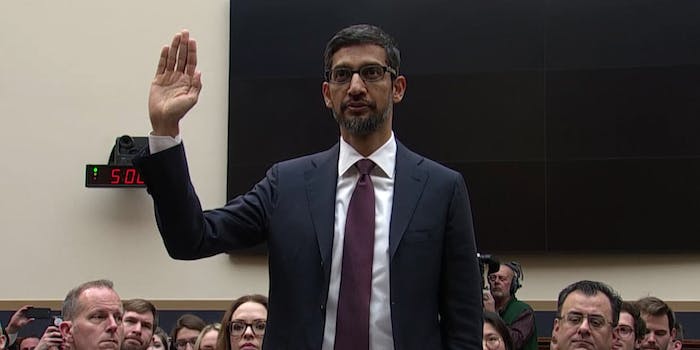 No, there's not a man 'sitting behind the curtain.'

Google CEO Sundar Pichai had to explain to Congress Tuesday why looking up the term “idiot” on his company’s search engine produced pictures of President Donald Trump.

Appearing before the House Judiciary Committee, Pichai was questioned by Rep. Zoe Lofgren (D-Calif.) on the issue in an attempt to refute allegations that the result was due to a political bias from Google.

“Right now, if you Google the word ‘idiot’ under images, a picture of Donald Trump comes up. I just did that,” Lofgren said. “How would that happen? How does search work so that would occur?”

Pichai replied by stating that such results are based on “things like relevance, freshness, popularity” and what internet users are associating with a particular term as opposed to a specific decision by Google.

“We provide search today for any time you type in a keyword,” Pichai said.”Wwe have gone out and stored copies of billions of pages in our index, and we take the keyword and match it against the pages and rank them based on over 200 signals.”

“So it’s not some little man sitting behind the curtain figuring out what we’re going to show the user?” Lofgren asked in response. “It’s basically a compilation of what users are generating.”

While Pichai did not confirm how the president came to be linked to the term “idiot,” a story last July published by the Guardian noted how anti-Trump activists were able to manipulate Google’s algorithm by “upvoting a post containing a photo of him and the word ‘idiot’ on Reddit.”

As noted by the Verge, a similar tactic was used in the mid-2000s so that searches for the term “miserable failure” returned images of then-President George W. Bush.