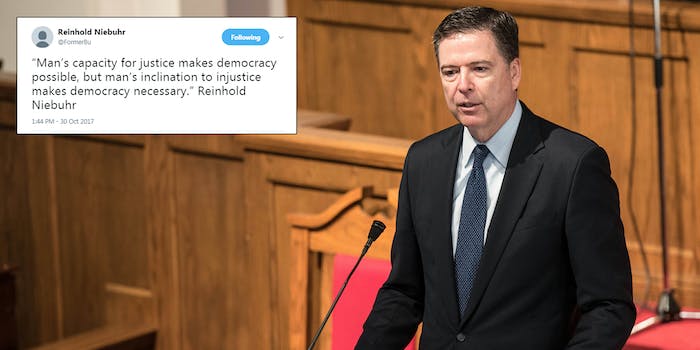 In March a Gizmodo reporter figured out that the account—then named @projectexile7—belonged to Comey. Since then, he’s been less secretive about it, with pictures from as recently as last week showing the former FBI Director being interviewed by Howard University.

Comey was fired by Trump earlier this year, putting a special counsel into overdrive, as many believe Trump obstructed justice by firing the FBI Director amid its probe into Russian interference in the 2016 election.

It appears Comey was doing some philosophical subtweeting from the account on Monday, as Mueller’s team announced that former Trump campaign chair Paul Manafort, his associate Rick Gates, and former Trump campaign foreign policy advisor George Papadopoulos all had their cases unsealed within hours of one another.

Manafort is facing nine charges and Gates is facing eight. They are both facing charges that include: making false statements, conspiracy to launder money, and conspiracy against the United States.

Papadopoulos pleaded guilty to making false statements to the FBI surrounding his contacts with people connected to Russian officials during the campaign—including trying to push for a meeting between Russia and Trump after he learned from a “professor” that the country claimed to have “thousands of emails” of “dirt” on 2016 Democratic presidential nominee Hillary Clinton.