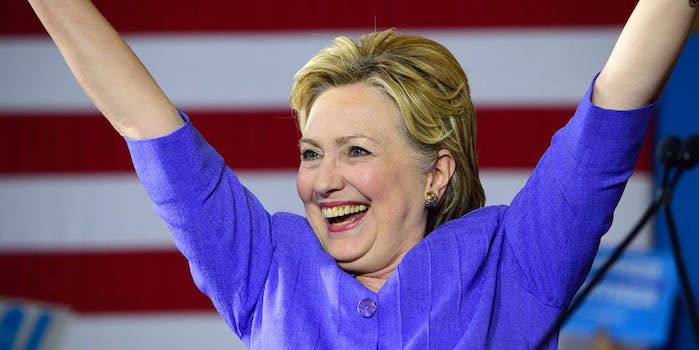 Hillary Clinton ‘overheated’ at the 9/11 memorial, had to leave the public event

The Trump campaign has been stoking conspiracy theories about Clinton's health for weeks.

Democratic nominee Hillary Clinton’s reported medical incident while visiting the 9/11 memorial has spurred a fresh round of speculation regarding the state of her health, much of it rooted in longstanding conspiracy theories.

Neither major party candidate has released their full medical records as of yet, and that’s breaking with some standard traditions and norms. Both Clinton and Trump have released no more than doctor’s notes detailing their physical fitness for America’s top job, although Clinton’s reads like an actual assessment from a medical professional, while Trump’s read like something a an over-eager novice might write, scant on actual medical details, and long on hyperbole about Trump’s “astonishingly excellent” health.

It’s important to note that diagnosing people from a distance with no professional medical background is a deeply disingenuous practice, and an urge that people should resist. It’s also essential to separate out some of the wild-eyed conspiracy theories about Clinton’s health from the very limited information that’s been released about what happened on Sunday morning. Clinton’s campaign said she became “overheated” and left the memorial to recover at her daughter Chelsea’s New York City apartment.

Soon after, a video emerged of Clinton waiting to be picked up, appearing unsteady on her feet as aides helped her into an SUV. That, and only that, is what’s conclusively known about what happened so far―although that hasn’t stopped many Trump die-hards from luridly gloating and celebrating over the incident, and the news cycle they clearly hope it will set off.

Discussing the matter of the two candidates’ medical histories has become fraught over the course of the last several weeks, in no small part thanks to the Trump campaign and its surrogates openly floating accusations and insinuations about Clinton’s health. Trump himself frequently impugns her “stamina,” and former New York City mayor Rudy Giuliani has eagerly encouraged cable news viewers to Google conspiracy theories about her health, many of which emanate from the so-called alt-right.

The trouble with that is that the insinuations are unsupported by any credible evidence. Even Clinton’s episode today, in the midst of a lengthy public event on a hot and humid New York afternoon, is not proof of anything dire or urgent, not in and of itself at least.

But all the baseless conspiracy-courting has made it tricky to raise the issue of the candidates’ medical records in a responsible, non-speculative way. For the record, at least one Trump campaign surrogate has called for both candidates to release their files: retired neurosurgeon Ben Carson, who insisted the American people should have the right to know what kind of shape their prospective presidents are in.

Clinton and Trump are both older-than-average candidates, and Trump would be the oldest president ever on his inauguration day at 70. Back in 2008, 72-year-old GOP nominee John McCain’s health became a topic of major discussion and speculation, a fact which his daughter Meghan highlighted following news of Clinton’s incident.

Hey @TheFix – can Hillary's health be a considered a valid issue for the media to cover now? My father never fainted on the campaign trail.

The Clinton campaign has yet to respond any further to her unsteadiness this morning. Needless to say, it’s not a story that the campaign wants to linger in the news cycle. Trump, for his part, has previously said he’d release his own medical records, but now it seems like he’s just going to talk about his health with Dr. Oz instead.

Clinton doctor: On Friday she was diagnosed with pneumonia. “ she is now re-hydrated and recovering nicely.”