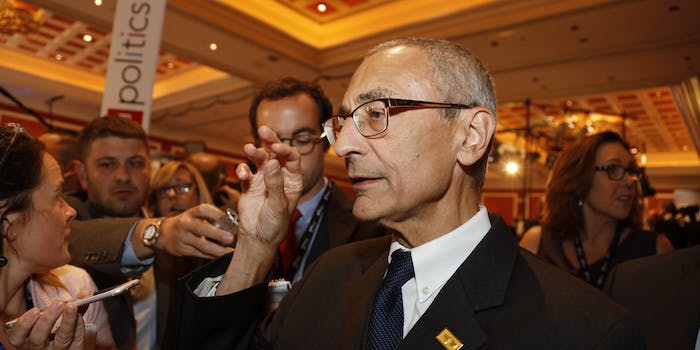 'This should distress every American.'

Democratic nominee Hillary Clinton’s campaign has joined calls to brief electors on any ongoing investigations into Donald Trump’s ties to Russia ahead of the Electoral College’s vote.

Earlier on Monday, 10 electors—nine Democrats and one Republican—asked James Clapper, the director of national intelligence, to provide intelligence briefings into Trump’s connection to Russia. Clinton campaign chairman John Podesta supported the electors’ effort in a statement provided to Politico.

The electors’ open letter to Clapper follows reports that Russia’s government orchestrated hacks against Democratic Party institutions and high-level players, including Podesta, with the goal of helping Trump win the election.

“The bipartisan electors’ letter raises very grave issues involving our national security,” Podesta said. “Electors have a solemn responsibility under the Constitution, and we support their efforts to have their questions addressed.”

Noting that the Clinton campaign “decried the interference of Russia in our campaign and its evident goal of hurting our campaign to aid Donald Trump,” Podesta condemned the media’s lack of attention on the issue. “We now know that the CIA has determined Russia’s interference in our elections was for the purpose of electing Donald Trump,” Podesta said. “This should distress every American.”

The Trump transition team and the Office of the Director of National intelligence have not responded to requests for comment on the electors’ letter.

Trump and his team have repeatedly condemned reports that the Central Intelligence Agency concluded Russia hacked Democratic entities to help Trump. On Monday morning, Trump tweeted that, had he lost and championed reports of Russian meddling, it would be labeled a “conspiracy theory.” He also cast doubt on the ability of U.S. intelligence investigators to identify the source of cyberattacks.

“The president-elect has said one thing on Twitter, the 17 intelligence agencies of the United States came forward two months ago to put forward their unanimous assessment about Russia’s malicious cyber activity,” Earnest said. “I’ll let you and the American people judge who is in a better position to defend their argument.”

President Barack Obama has ordered an investigation into Russia’s reported tampering in the U.S. election.

Trump won 306 of the 538 available electoral votes, solidly winning the presidential election. Thirty-seven electors would need to defect from Trump—some in violation of the law—for the businessman to still lose the election. The Republican-controlled U.S. House of Representatives would then vote to choose a victor.