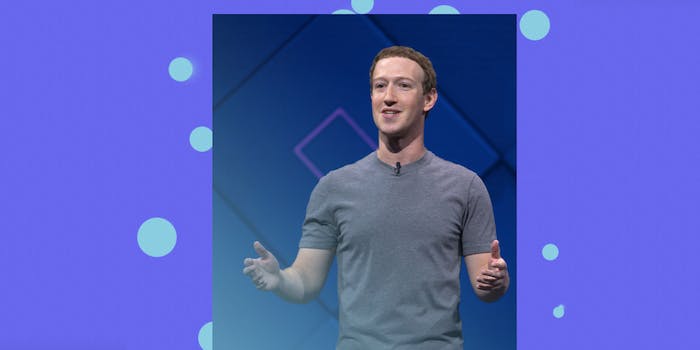 Clear History is essentially the cookie clearing setting you’re used to having for your web browser—but for Facebook. The feature will be a “simple control to clear your browsing history on Facebook,” according to Zuckerberg’s post. This includes items you’ve clicked on and your website visit history, among other things.

Today at our F8 conference I'm going to discuss a new privacy control we're building called "Clear History". In your…

When this capability rolls out, you’ll be able to see what information websites and apps are using to serve you Facebook ads. You’ll then be able to clear that information on demand or prevent Facebook from being able to track and store that data going forward.

“Your Facebook experience won’t be as good as it relearns your preferences,” Zuckerberg warns.

Yeah, that’s OK, Zuck, but thanks for the concern.

Facebook has been under intense scrutiny since the public learned that through an innocuous-seeming Facebook quiz, data analytics firm Cambridge Analytica gathered data on roughly 87 million Americans and then used the data to help Trump’s presidential campaign.

Since then, Facebook has made an overwhelming overhaul of its privacy and security settings. Facebook hopes that by giving users greater control over their data, who sees it, and how it’s used, they’ll continue to use and trust the social network just like they always did.

Clear History is a step in the right direction. It’s possible that the move could even impact Facebook’s bottom line if a significant portion of users opt out of the lucrative ad-tracking that finances the social network.

Clear History isn’t yet available for Facebook users. It will roll out in the next few months. In the meantime, if you’re considered about your Facebook privacy and security, here are some good tips to follow.