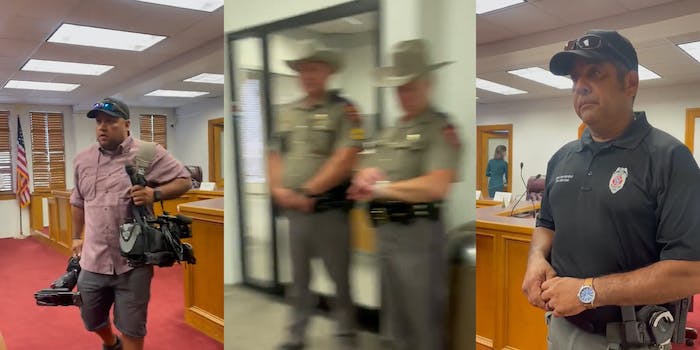 Multiple people were removed from a meeting at Uvalde City Hall in Texas on Monday after a fire marshall claimed people were “intimidated” by them, according to a viral tweet.

A CNN reporter claimed that members of the media, a local chaplain, and a father of a victim of the Uvalde shooting were all told to exit the meeting without much explanation. In the video posted by the reporter, the fire marshall can be seen waiting for people to leave the meeting. The reporter asked the marshall why people would be intimated by them, and the marshall responds by telling the reporter to leave again.

According to the reporter, Shimon Prokupecz, they “were asked to leave Uvalde City Hall because people are intimidated by us. Texas legislators are meeting here with law enforcement behind closed doors. The fire marshal also told a local chaplain and father of a victim to exit from the building.”

It’s unclear, however, if it was actually a father of a victim who was removed. According to the San Antonio Express-News, Brett Cross, the uncle of a victim was removed from the meeting.

The video has over a million views now on Twitter alone.

It is unclear who, if anyone, was “intimidated” by the presence of the media, a chaplain, and a family member of one of the victims, or how they were able to influence the decision to remove them.

The incident occurred just hours before the Austin American-Statesman published a story reporting Uvalde police arrived at Robb Elementary School—equipped with proper tactical gear—far sooner than previously reported, deepening questions about why police didn’t act. The San Antonio Express-News also published a story Monday showing police didn’t try to open the door where the shooter had locked himself until nearly an hour after they arrived. Other reporting questioned whether the doors were indeed locked.

“I guess the first amendment doesn’t matter so long as you hold on to the second for dear life,” one user wrote.

“A City Hall that is closed to city Residents and press is not a functioning government,” said another.