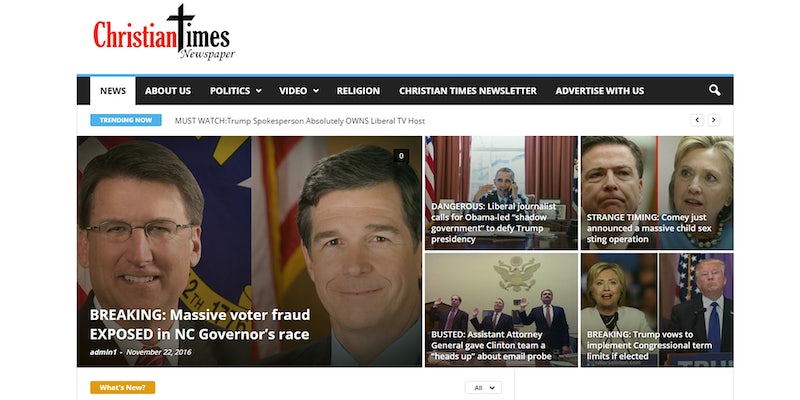 Cameron Harris was a legislative aide to a Republican state delegate until his side job running a fake news website was exposed.

If you’re going to create and maintain a fake news website aimed at “exposing” Democrats, you might want to make sure you don’t work for a Republican lawmaker at the same time. And you certainly shouldn’t tell a real news source about your penchant for spreading fake news without first concealing your identity.

That’s the hard lesson Cameron Harris learned on Wednesday night after the 23-year-old was fired from his job as an aide to a Republican delegate in Maryland’s state house hours after a New York Times article exposed his lucrative side gig as a purveyor of fake news on his website “Christian Times Newspaper.”

According to the Frederick News-Post, Harris was an aide to David Vogt III and lived in his employer’s home (he was renting the basement). He also, for about a year, ran “Christian Times Newspaper,” having purchased the expired domain name (Wayback Machine shows a 2004 version of the site featuring several articles about Mel Gibson’s “The Passion” as well as the paper’s decision to sell the Christian Times trademark and rebrand itself as Christian Examiner, which explains how its domain name expired in the first place) for five dollars.

Harris then populated his new site with articles that essentially told conservatives what they wanted to hear, rather than what was true. Many were political in nature. The Times article focuses on Harris’s biggest viral success: a completely fabricated story about tens of thousands of pre-written votes for Hillary Clinton discovered in a warehouse last September. A Wayback Machine image of the site from October 2016 also shows several articles disparaging black men who were killed in high profile police shootings. Like most of the fake news sites that came to prominence during the presidential election, Harris found that he could tap into Trump supporters’ desire to click on anything that validated their mistrust of his opponent and the mainstream media that seemed to be propping her up.

Harris only came forward as the site’s founder when the Times “discovered an electronic clue that revealed his secret authorship.” For the fake Clinton ballots article, Harris told the Times that he simply searched Google images for “ballot boxes” to find some convincing art to accompany his article; he found an image from an English newspaper which he then flipped, crudely photoshopped the now-reversed “ballot box” labels off of the black containers, and then added them back onto a few of the boxes. He promoted the article on a several Facebook pages he created to boost his work to as large an audience as possible (a page devoted to Rep. Trey Gowdy, for instance, frequently posted links to Christian Times Newspaper articles, which Christian Times Newspaper’s Facebook page then shared). The Times estimated that it was shared by six million people, even as it was debunked by, among others, Snopes and Ohio’s Secretary of State, who is a Republican. Harris said he earned about $22,000 from ads on a site he worked on for about 20 hours in all. Then the site’s source of income dried up, as Google announced it would no longer allow fake news sites to use its ad platform.

Harris’s main source of income has also dried up: He was fired soon after the Times article was published (“I can’t support dishonesty in any way,” Vogt told the News-Post). In addition to working as Vogt’s aide and being his housemate, Harris was also Vogt’s campaign manager when he ran for the Republican nomination to be a U.S. representative (Vogt lost the primary, his campaign website says, to “Amie However,” whose name is actually Amie Hoeber).

In a statement Harris posted on Twitter after the Times article came out, he apologized not for what he did but “to those disappointed by my actions,” adding that he hoped he would “be allowed to contribute my informed experience to a larger dialogue about how Americans approach the media.” He recently followed several literary agents and reporters on the platform.

Earlier in January, Harris criticized an MSNBC reporter for criticizing fake news after retweeting an article that Harris considered to be fake news, calling the reporter “self-righteous.”

A few hours after tweeting his sort-of apology for his own role in fake news, Harris tweet-scolded BuzzFeed for publishing what Harris said was a “patently false” document that alleged the incoming president had, among other things, paid prostitutes to pee on a bed in a Russian hotel room. (Most of the dossier’s allegations have not yet been proven false—or, for that matter, true.)

Harris told the News-Post that he left Vogt’s house when working on his site, which he only did during his personal time using his personal computer. It was not clear if he still lived in his former boss’s basement.