According to Twitter, Chris Christie won the Republican debate

Ben Carson, on the other hand, may have had the worst night of his campaign.

When the Republican presidential candidates met last month in Milwaukee for their third debate, New Jersey Gov. Chris Christie moved from the main stage to the undercard. Thanks to a standout performance there, he rose slightly in the polls—enough to re-earn him a seat at the big kids’ table during Tuesday evening’s fourth debate in Las Vegas. According to data compiled for the Daily Dot by social-media analytics firm Spredfast, Christie made the most of that opportunity.

Donald Trump captured the largest share of the public’s attention on Twitter. While the debate raged, there were 129,212 tweets about the real-estate-heir-turned-reality-TV-star—a 227-percent increase over his average level of social-media buzz during the past week. But Christie took second place with 79,284 tweets. What makes the online conversation about Christie so remarkable is that this volume of tweets is a 4,507-percent increase over his average buzz over the last seven days.

Christie triggered larger individual conversation spikes on Twitter than any other candidate, according to Spredfast. One of his biggest moments occurred when he blamed the hoax terrorist threat that shut down the Los Angeles school system on President Obama and former Secretary of State and Democratic frontrunner Hillary Clinton.

Christie’s spat with Kentucky Sen. Rand Paul about the creation of a no-fly zone over Syria also attracted significant attention, as did his response to the Syrian refugee crisis.

Christie vs. Paul on a no-fly zone in Syria pic.twitter.com/Y24TprGwBW

The debate’s focus on foreign policy gave Paul, the race’s libertarian standard-bearer, the opportunity to differentiate himself from the pack. Whereas other candidates largely called for a muscular foreign-policy approach, arguing for direct military involvement in nearly every possible situation, Paul argued for restraint.

While this strategy only paid middling dividends in terms of overall Twitter mentions, on the millennial-focused anonymous social network Yik Yak, user sentiment toward Paul was far more positive than for anyone else on stage. 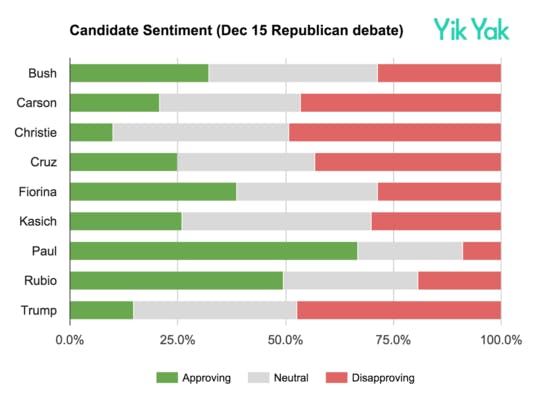 Yik Yak’s network is overwhelmingly populated by a college-age crowd, meaning that evidence of Paul’s success with this group likely won’t translate directly into a massive boost among the broader, considerably older pool of Republican primary voters. But the margin by which his message surpassed those of his opponents among Yik Yak’s users is worth noting.

“Coming into this debate many speculated that Carson might struggle with his lack of experience on the subject of national security,” said Spredfast’s Courtney White. “Tonight, the social sharks smelled blood in the water and pounced when Carson stumbled, pivoted, and struggled through most questions and head-to-head debates with other candidates. Most of the buzz related to Carson was negative—including his biggest spike in mentions during his moment of silence.”

Please join me in a moment of silence for Ben Carson's campaign. #gopdebate

When Salem Radio host and debate co-moderator Hugh Hewitt asked Carson if he would be comfortable ordering airstrikes that could kill “thousands of innocent children and civilians,” Carson responded in the affirmative with a striking callousness. Just as the audience in the room audibly gasped at his response, the online reaction wasn’t much different.

Ben Carson says it's "merciful" to kill thousands of innocent children & civilians, implies they will thank him like kids he operates on.

"I don't do a lot of talking. I do a lot of doing." Ben Carson just quoted a douchebro's Tinder profile.

While the conversation around Carson was generally derisive and mocking, social media all but ignored Fiorina. She received the fewest mentions of any candidate and didn’t have a single notable spike during the entire evening.