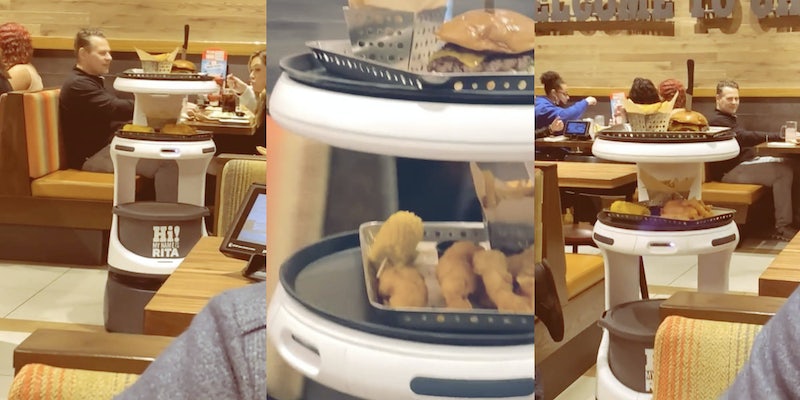 ‘These companies will really do anything but give people raises’: Viral TikTok of Chili’s robot server sparks debate

'Support the service industry. Tip over the robot.'

A viral video shows a robot serving a TikToker at a Chili’s restaurant in Texas. Many commenting on the video see the robot as an indictment on a service industry not willing to ensure quality work experiences and livable wages for employees.

@julie_bug11 filmed and posted the video with over 652,000 views, showing her and her partner at a table in Chili’s. A robot with their meal makes its way around to them. Customers are surprised by the machine and its novelty.

Much of the comments were people in defeat over the service industry’s future. “These companies will really do anything but give people raises,” said one commenter. “They really don’t wanna pay employees?” opined another. “Support the service industry. Tip over the robot,” joked a commenter encouraging action.

One commenter believed serving the food was just the start: “The service industry is doomed. Soon we’ll all be on tablets ordering the food ourselves, robots will cook the food, and robots will deliver the food.”

However, it appears that the commenter’s future has not quite arrived, according to a report from Esmi, a labor analytics firm.” Restaurants, which are suffering from labor shortages, still need humans for their soft skills and most delicate cooking, and human-robot collaboration within direct-to-consumer food service is in its infancy.

“Companies trying to invest in AI development already face significant worker and skill shortages,” the report noted. “As for robotic automation, analysis of market share for robotic automation has shown that the industries already most invested in it (automotive, electronics, and metal) are still the ones driving the market, while collaborative robots are not meeting the standards needed for market penetration.”

However, Chili’s has made the beginning leap, using the ‘Servi’ robot server shown in the video, which is produced by Bear Robotics.

The Daily Dot has reached out to @julie_bug11 via TikTok comments, Brinker International (parent company of Chili’s), and Bear Robotics for comment.