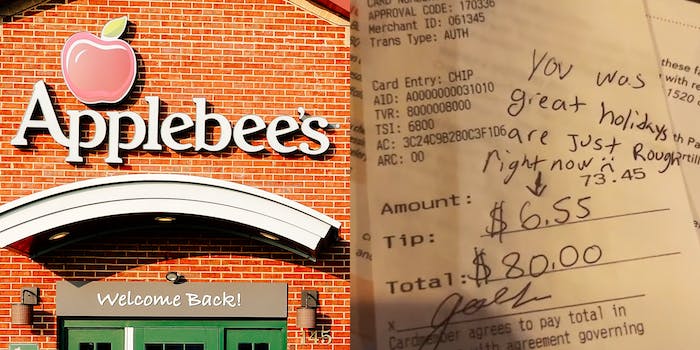 If you can't afford to tip, should you eat out?

If you can’t afford to tip your server, should you eat out? That is the question one viral TikTok of a low tip is asking.

The video making its rounds on TikTok shows a receipt from an Applebee’s in Staten Island, New York.

The customer left a note saying “You [were] great. Holidays are just rough right now,” with an arrow pointing down to the tip.

The video was posted by TikTok user @kingj023241 but the receipt says the actual server’s name is Dana G.

While the TikTok video is starting to pick up momentum with views, it’s the comment section where it is really starting to heat up.

“Y’all really telling on yourselves in the comments,” one user wrote on the video. “Don’t go out to eat if you can’t afford to tip. There’s no argument you can make to justify it.”

“If money was that tight, why go spend almost $80 on a meal?,” another person asked.

But others were quick to back up the customer.

One woman wrote, “They wanted to take their family somewhere nice and at least they tipped.” Her comment got almost 700 likes.

Others said this video is pointing the blame at the wrong person and instead the server should be upset at the company she works for.

“Why not call out the establishment that doesn’t pay y’all guys instead of calling out a family that wanted a night out,” one person wrote.

An interesting idea in a time that the restaurant industry is being hit so hard by labor shortages. We learned in September with the National Restaurant Association’s State of the Industry Mid-Year Update, three out of every four restaurant owners say employee hiring and retention as their greatest difficulty.

Low wages and long hours certainly have something to do with that.