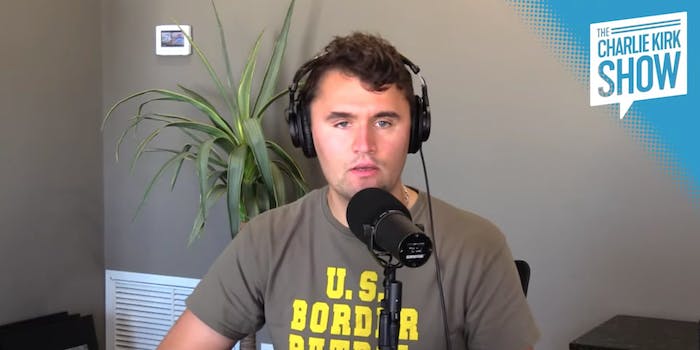 Kirk is just the latest right-wing figure to make the outrageous claim.

Conservative commentator Charlie Kirk recklessly suggested on Wednesday that as many as 1.2 million people may have died from the COVID-19 vaccine.

In remarks on his radio talk show, Kirk, know best for founding the conservative student organization Turning Point USA, speculated that the vaccine could be taking more lives than the actual virus.

“The Vaccine Adverse Effect Reporting System shows that there’s as many as 12,313 deaths after getting the vaccine,” Kirk said. “We’ve also gone into detail about how VAERS and the FDA—according to this study of the electronic support for public health Vaccine Adverse Effect Reporting System—shows that it may really might only reflect one percent. So, if VAERS is off by 99 percent, that would mean 1.2 million people died after getting the vaccine.”

It remains unclear what study Kirk, a far-right Twitter troll who routinely pushes conspiracy, is referring to when discussing the VAERS data.

And Kirk’s remarks irresponsibly ignore how VAERS functions. The agencies that maintain the VAERS database openly note that reported deaths have not actually been proven to be linked to vaccinations.

The VAERS database is regularly used by conspiracy theorists as evidence of an onslaught of vaccine-induced deaths. Fox News host Tucker Carlson likewise referenced VAERS in May when claiming that dozens of people were dying from the vaccine every day.

Kirk went on to state that he wasn’t claiming the statistics were actually true before calling on Congress to investigate.

“I’m not saying that’s true,” Kirk said. “I’m saying that according to how we calculate VAERS by the independent study that was administered, this could be true.”

Kirk closed out the segment of his show by attacking legislators such as Sen. Mitch McConnell (R-Ky.) for “peddling” the vaccine.