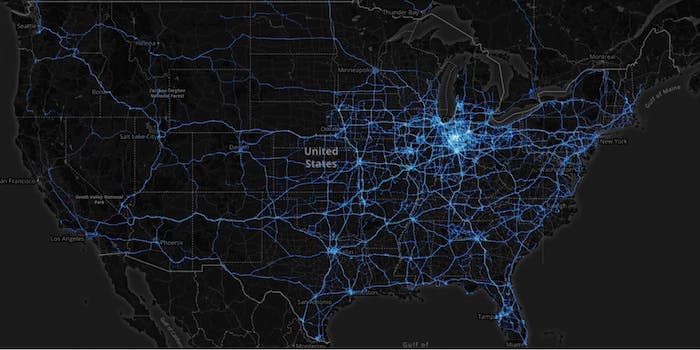 The data shows how the very industries helping keep America fed could inadvertently be helping spread the virus.

A new cellphone heat map is highlighting the vulnerable nature of the U.S. supply chain as the debate over reopening the economy intensifies.

The visualization, based on anonymized cellphone location data, focuses on five meatpacking plants across the country to reveal just how expansive their footprints are.

The video was made possible with cellphone data collected by location technology company X-Mode and the data visualization platform Tectonix.

The Daily Dot reported in March on a similar video produced by Tectonix that detailed the movements of cellphones leaving a single Florida beach following spring break.

The latest video tracks the location of cellphones that originated from a Tyson Foods plant in Indiana throughout the month of March.

Unsurprisingly, Tectonix notes, the plant’s workers traveled not only from across Indiana but from nearby states as well. Other devices were linked to nearly every other state in the nation and even Canada.

Tectonix says the visualization aims to show the intricacies of supply-chain operations and the need for balance when weighing the economy and public health against plans to reopen.

“Seeing data like this come to life can help operations leaders make smarter decisions that can have huge impact,” Tectonix tells the Daily Dot. “Are there more optimal routes based on real-time trends? Are there high-risk areas that are seeing increased or decreased traffic?”

The data also shows how the very industries helping keep America fed could inadvertently be helping spread the virus.

Just this week, it was learned that a single pork processing plant in Missouri had 373 employees test positive for COVID-19.

The U.S. Department of Agriculture’s Food Safety and Inspection Service (FSIS) also revealed that 145 federal meat inspectors have been diagnosed with coronavirus, three of them have died.

Some workers, who have complained about lax safety standards, have even walked off of the job out of fear for their health. The price of meat has also continued to rise as a result, leading to shortages all over the country.

While cellphone location data could undoubtedly provide insights into COVID-19’s affect on the food industry, privacy concerns are present.

Researchers argue that it is trivial to connect so-called anonymized location data to actual identities, for example, although X-Mode and Tectonix say they both go to great lengths to protect users by never collecting personally identifiable information.

The U.S. government also began using cellphone location data in March in an attempt to better understand how far the coronavirus has spread.