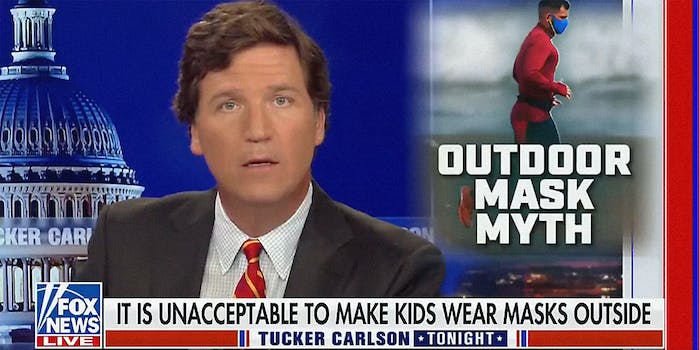 The party of 'political freedom' wants you to call the cops if you see a child wearing a face mask.

Tucker Carlson thinks it’s abusive to make a child wear a face mask outside—and he wants you to call the police if you see one. Some conservatives wholeheartedly agree.

Carlson made his wild, reckless claim and command on Monday night’s episode of his show on Fox News.

“The only people who voluntarily wear masks outside are zealots or neurotic,” he said, urging viewers to ask people to take off “repulsive” masks until it becomes socially unacceptable to wear one.

“As for forcing children to wear masks outside, that should be illegal. Your response when you see children wearing masks as they play should be no different from your response to seeing someone beat a kid in Walmart.

“Call the police immediately. Contact Child Protective Services. Keep calling until someone arrives. What you’re looking at is abuse, it’s child abuse, and you’re morally obligated to attempt to prevent it.”

While most of Twitter pushed back against Carlson and “Child Protective Services” trended among those appalled and alarmed by his comments, anti-maskers like Pat Condell echoed them.

Steven Crowder titled Tuesday’s livestream of his show, “We AGREE with the CDC! Why Tucker Carlson Is Right About Masking Kids.”

In reality, the Centers for Disease Control and Prevention (CDC) currently recommends wearing masks “in public settings, at events and gatherings, and anywhere they will be around other people,” including for children, excepting those under two years old.

Others jumped on the anti-mask bandwagon.

Facial coverings have become one of the many battlegrounds in the politicized war over COVID-19 restrictions. Republicans like Carlson have turned the simple act of wearing a mask into a wedge issue to divide Americans.

And now they’re urging people to enlist the help of authorities to enforce their views.