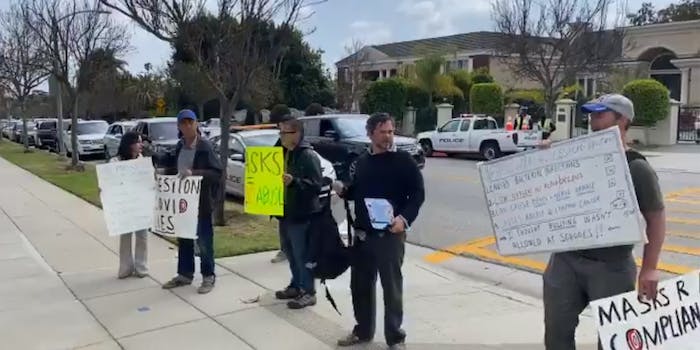 One kid stuck his tongue out at protesters.

Several new videos show a group of anti-maskers protesting outside a Beverly Hills elementary school—and failing miserably to make an impression on the aloof kids.

The maskless crusaders gathered outside Hawthorne Elementary on Wednesday, the Daily Beast reports. They tried to hand fliers to the students and held signs that said “Question COVID lies” and “Masks = child abuse.”

One protester tells a student, “I’m positive you hate that mask, and it smells bad.”

Another says, “No one likes the masks, so I don’t know why you’re wearing them.”

Hawthorne Elementary School Principal Sarah Kaber told parents via email that the school anticipated the protest and had enlisted extra security for the event, MSN reports. “We support every person’s constitutional rights when on public property,” she wrote. “We ask for your support in de-escalating and disengaging with any heightened feelings in order to make our students feel calm and safe.”

Thankfully, whether due to the forewarning, COVID fatigue, or just plain old common sense, the Hawthorne Elementary students couldn’t be bothered by the anti-maskers’ protest.

In a Wednesday Twitter thread, Beverly Hills Courier reporter Samuel Braslow shared several videos from the protest. In one, the anti-maskers hand out cards and flyers to kids. One masked student puts up his hands and denies a card, while other students crumpled up the flyers, according to Braslow.

In another video, a school administrator seemingly mocked the grown adult protesters for not picking on somebody their own size. “Why aren’t you guys at the L.A. County Department of Public Health?” the administrator asks. “Too big for you?” (The protesters say they’ve “done it already” and “continue to do it.”)

Protest organizer Shiva Bagheri is in one of Braslow’s videos arguing with a student who told her that face masks work. “You think it does because they told you that, sweetheart,” she says. “It’s called propaganda. These are the same people touting population control and killing innocent babies.”

The student responds by sticking his tongue out at her.

“I’d rather see your face sticking your tongue at me than you having that thing over your face,” Bagheri tells the kid. “I want you to breathe. I want you to get oxygen to your brain.”