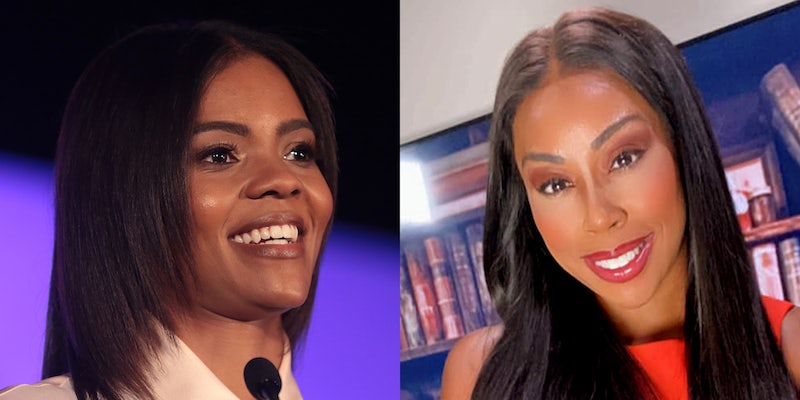 A former congressional candidate has filed a $20 million defamation suit against conservative commentator Candace Owens over statements Owens made in an Instagram video earlier this summer.

Republican Kimberly Klacik, who lost her bid for a Maryland congressional seat last year, claims that Owens defamed her by falsely claiming that Klacik was a strip club “madam,” used illegal drugs, and that she committed campaign fraud and money laundering. According to the Baltimore Sun, which first reported on Klacik’s lawsuit, she says that Owens’ claims cost her a book deal, a contract with a “nationally recognized vendor,” and caused politicians to cancel fundraising appearances with her.

In the video, Owens purportedly also said that Klacik’s charity is illegitimate, per the Sun. While Owens said that she “could not confirm” her allegations, she went on to make several assertions of fact, including accusing Klacik of “money laundering, tax fraud, and campaign fraud,” and paying vendors to “move money off the books.”

Owens has reacted to the case by doubling down on her accusations against Klacik. She also tweeted that the lawsuit is “obviously frivolous.”

Later, Owens tweeted a link to the Instagram video she made about Klacik.

Owens says she’s refused Klacik’s repeated demands that she take the video down. As of this writing, the 44-minute video from June 22 has 1.6 million views. Owens titled it “Race Hustling on the Right.” Both she and Klacik are Black.

Some have considered Klacik a rising star in the Republican Party. Last year, former President Donald Trump shared a viral video she made about why Black Americans don’t have to vote for Democrats. She was also a featured speaker at the 2020 Republican National Convention.

The conflict between Klacik and Owens reportedly began with a social media spat over President Joe Biden’s decision to make Juneteenth a federal holiday.

Owens’ adversaries were thrilled to learn that she’s being sued for $20 million. Many took particular pleasure in the fact that a fellow conservative is suing her.

“Candace Owens is about to go through some things. Approximately 20 million things,” tweeted Christopher Bouzy, creator of the Bot Sentinel.