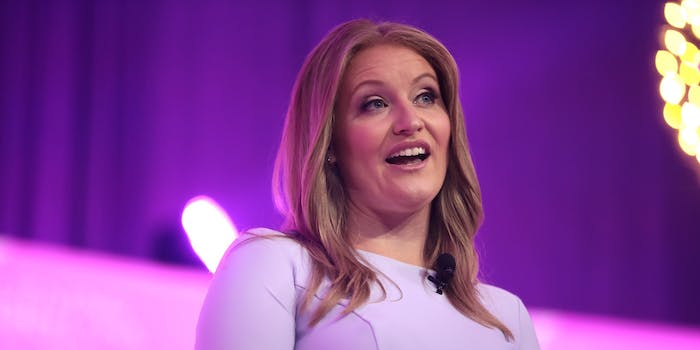 'When Jenna Ellis fights Ronna Romney McDaniel, we are all winners.'

Jenna Ellis wants the world to know that she’s leaving the Republican Party. The attorney who represented former President Donald Trump in his fruitless quest to overturn the 2020 election results announced her departure on Monday.

Ellis claims that the Republican National Committee abandoned Trump days after the election and kept the $220 million it raised that was supposed to support his effort to overturn the election. Ellis says that she won’t be a member of the party as long as Ronna McDaniel is chair.

McDaniel responded to these accusations by blocking Ellis on Twitter.

Now Ellis is calling on others to stop supporting the party.

Ellis’ vow to depart the Republican Party comes amid an intensifying controversy over reports that the RNC was secretly opposed to Trump’s baseless claims of widespread voter fraud. In late November, the RNC chief counsel sent an email calling the litigation a “joke” and saying Ellis and Rudy Giuliani were “getting laughed out of court,” according to the Washington Post. Ellis tweeted a screenshot of the alleged email Tuesday morning.

“It’s setting us back in our fight for election integrity and they are misleading millions of people who have wishful thinking that the president is going to somehow win this thing,” RNC attorney Justin Riemer wrote.

According to an upcoming book by Michael Wolff, which Business Insider obtained an advance copy of, Ellis and Giuliani learned of Riemer’s views last November. Giuliani reportedly called Riemer and demanded he resign, then called McDaniel to ensure he was fired. Riemer remains chief counsel.

“I will say publicly now what I then said privately: I take issue with individuals who brought lawsuits that did not serve President Trump well and did not give him the best chance in court.”

The RNC also denies it opposed Trump’s efforts, Insider reports. It claims that it did everything in its power to “fight for election integrity,” work it says continues to the present day.

Ellis’s vendetta against the RNC and McDaniel has support from Trump allies on the fringe, such as Sebastian Gorka and Diamond and Silk.

Since Trump left office, the Republican Party has increasingly split between his die-hard supporters and members who want to move on from the polarizing former president.

While the rift is cause for concern among conservatives, others are finding it equally fascinating and hilarious. Several have suggested they don’t know who to root for.

“The Ronna McDaniel vs. Jenna Ellis spat is the most entertaining clash since Godzilla vs. Kong, but the combatants are less charming and sophisticated,” Mark Jacob tweeted.

Trump has not weighed in on the matter.