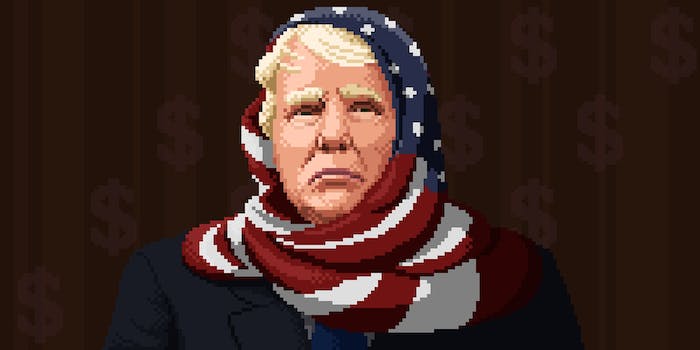 Is it legal for Donald Trump to bribe delegates?

This is not an April Fools' Day joke.

With the Republican frontrunner’s self-professed talent for cutting deals and such high stakes, it’s likely Donald Trump will pull out the big guns to win over the 100 to 200 delegates that remain uncommitted or unbound to another candidate.

The same applies in the event of an open “all bets are off” convention, in which all the delegates are no longer bound to Trump or anyone else after the first ballot.

The answer is, technically, yes.

Delegate bribery seems to exist in a legal gray area. Sources told ABC News that there are no Republican National Convention rules that prohibit bribing delegates on the floor. State ethic laws that ban gift-giving to public officials don’t apply to delegates, as LawNewz points out.

In fact, “bribes” in the form of political appointments during election season is pretty standard, notes Sasha Issenberg of Bloomberg:

“There is nothing in the RNC’s rules that prohibits delegates from cutting a deal for their votes, and lawyers say it is unlikely that federal anti-corruption laws would apply to convention horse-trading. (It is not clear that even explicitly selling one’s vote for cash would be illegal.) To lure a governor, for example, the offer of a Cabinet post could be necessary, while a delegate may be swayed by a job as regional HUD administrator or a seat on the Postal Regulatory Commission. A crucial vote on a procedural question could be ensured with a state party’s website-design contract to a delegate’s cousin’s firm.”

While this may be standard and not often prosecuted, it is illegal under 18 U.S. Code § 599 if a candidate “directly or indirectly promises or pledges the appointment, or the use of his influence or support for the appointment of any person to any public or private position or employment, for the purpose of procuring support in his candidacy.” A pro-Hillary Clinton watchdog group on Thursday sent a letter to the Justice Department claiming that Trump broke the law by convincing former neurosurgeon and 2016 GOP candidate Ben Carson to endorse him.

Regardless, straight-up bribing delegates has happened in the past. According to the Dallas Morning News, incumbent President Gerald Ford wooed delegates with White House visits and rides on Air Force One during the 1976 Republican primaries. Ford’s last-minute grab for delegates helped him win the nomination in a tight race with Ronald Reagan that escalated to an open convention.

While Trump has neither the White House nor Air Force One, he does claim to have billions of dollar.

How likely is it that Trump—as the frontrunner—would actually need to bribe delegates? There’s still a strong chance that Trump will win the 1,237 delegates he needs to secure the Republican nomination for president before the party holds its convention in July. No delegates have so far reported receiving bribes in the form of cash or gifts from the Trump campaign. Of course, there’s still plenty of time.

Meanwhile, the fight between Trump and Texas Sen. Ted Cruz to win over Florida Sen. Marco Rubio‘s 172 delegates is getting nasty. Rubio wants to keep his delegates bound in order to avert a Trump win at the convention. Trump dropped his threat of a lawsuit after Louisiana’s five former Rubio delegates chose to endorse Cruz despite the New York businessman winning the majority of the state’s votes.

Just to show you how unfair Republican primary politics can be, I won the State of Louisiana and get less delegates than Cruz-Lawsuit coming

In the event that Trump doesn’t win the majority of delegates, there’s a risk that an open convention could change a heart or two hundred. A lot is likely to happen between now and July. The “Stop Trump” movement is rallying behind an open convention as their last line of attack against Trump. Courting delegates seems to be Cruz’s strong suite. Politico reported that Cruz is wracking up unbound delegates in states like Georgia and South Carolina, where Trump won the primary.

Trump is readying a method of attack. Breitbart reported on Tuesday that Trump hired Ford’s former delegate manager Paul Manafort. Manafort would no doubt be a valuable weapon in the event of a delegate fight as heated as the 1976 open convention.