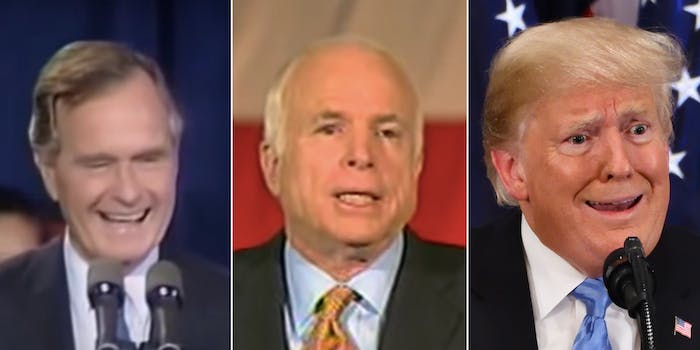 People doubt Trump will give a similarly elegant address.

The Trump campaign released a statement on Friday morning claiming the “election is not over” and calling Biden’s victory a “false projection” that is “based on results in four states that are far from final.”

Biden has pulled ahead in Pennsylvania as ballots continued to be counted. If Biden wins the state, he will have the necessary Electoral College votes to win the presidency.

Trump’s likely refusal to concede victory should come as no surprise to anybody who’s been following the election, as he has repeatedly deployed such rhetoric throughout his campaign.

But Trump’s vehement denial of Biden’s victories in key battleground states stands in stark contrast to the “graceful” concession speeches from past Republican candidates, former President George H.W. Bush and late Sen. John McCain (R-Ariz.), which have resurfaced amid the 2020 election turmoil.

Given the backdrop of Trump’s likely reaction to the race, those old speeches are going viral.

When Bush lost reelection to Democratic Gov. Bill Clinton in 1992, he delivered a speech in which he praised the “majesty of the Democratic system” and wished the Clinton administration a “smooth transition of power.”

“The people have spoken, and we respect the majesty of the Democratic system,” Bush said. “I just called Gov. Clinton over in Little Rock and offered my congratulations. He did run a strong campaign. I wish him well in the White House, and I want the country to know that our entire administration will work closely with his team to ensure the smooth transition of power. There is important work to be done, and America must always come first, so we will get behind this new president and wish him well.”

Writer Adam Hamdy tweeted the video of Bush’s speech with the caption, “This is how it’s done,” on Nov. 4, and it has since earned 4.5 million views.

McCain’s 2008 concession speech to President Barack Obama similarly went viral after NowThisNews tweeted footage of it on Thursday. The video, which has since been viewed over 10 million times, shows McCain commending Obama for a successful campaign and shushing his audience when they boo Obama.

“A little while ago, I had the honor of calling Senator Barack Obama to congratulate him—please—to congratulate him on being elected the next president of the country that we both love,” McCain says. “In a contest as long and difficult as this campaign has been, his success alone commands my respect for his ability and perseverance. But that he managed to do so by inspiring the hopes of so many millions of Americans who once wrongly believed that they had little at stake or little influence in the election of an American president is something I deeply admire and commend him for achieving.”

In the wake of these two concession speeches resurfacing, many Twitter users speculated that Trump would deliver no such address.

Instead, they pointed to a tweet from early Friday morning in which the president claimed to “easily WIN the Presidency of the United States with LEGAL VOTES CAST”—a tweet that Twitter flagged for misinformation.

“This is Trump’s concession speech,” anchor and political commentator Lawrence O’Donnell tweeted. “He knows he lost.”

Other people shared other comedic video clips which they speculated Trump might emulate in his so-called “concession” speech.