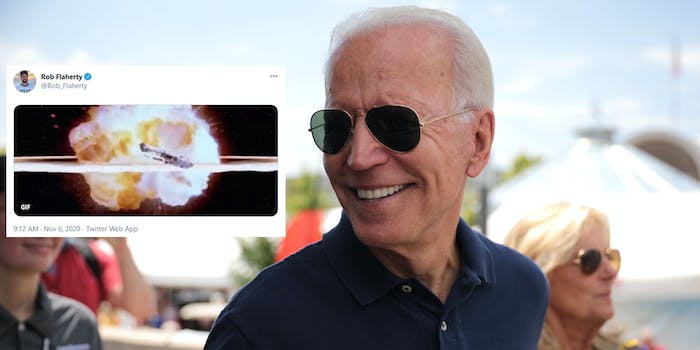 People online loved the call back to the Trump campaign's Death Star reference.

Former Vice President Joe Biden‘s digital director trolled President Donald Trump‘s campaign by tweeting a GIF of the Death Star from Star Wars exploding as the Democratic nominee comes incredibly close to being named the next president-elect of the United States.

Rob Flaherty, the digital director of Biden’s campaign, tweeted the GIF shortly after 8am CT—just after the former vice president jumped ahead of Trump in the vote count in Pennsylvania.

If Biden is officially the winner in Pennsylvania—only Decision Desk HQ has called the race—he would have the necessary Electoral College votes to win the election. Biden is also ahead in several other states, including Georgia, Nevada, and Arizona.

Even if the race is called in favor of Biden, Trump is likely to push legal challenges and is not likely to concede the election. The campaign early Friday released a statement saying that “this election is not over.”

Regardless, the Star Wars GIF is a direct troll of former Trump campaign manager Brad Parscale, who compared the president’s “juggernaut campaign” to the Galactic Empire’s superweapon in the movies back in May.

“For nearly three years we have been building a juggernaut campaign (Death Star). It is firing on all cylinders. Data, Digital, TV, Political, Surrogates, Coalitions, etc. In a few days we start pressing FIRE for the first time,” Parscale tweeted on May 7.

Parscale added a GIF of the Death Star firing its laser from Return of the Jedi.

With Biden’s win looking incredibly likely, Flaherty trolled the campaign with a GIF of the Death Star exploding in Return of the Jedi, with the Millennium Falcon flying away from the super weapon.

The Star Wars troll quickly popped off with people online.

This isn’t even the first time Star Wars came up during the election.

During the first presidential debate in late September, Trump talked about “forest cities,” prompting Twitter users to make jokes about Ewoks, the species that lives on the forest moon of Endor, where the Rebel Alliance lands to deactivate the shield generator for the second Death Star.