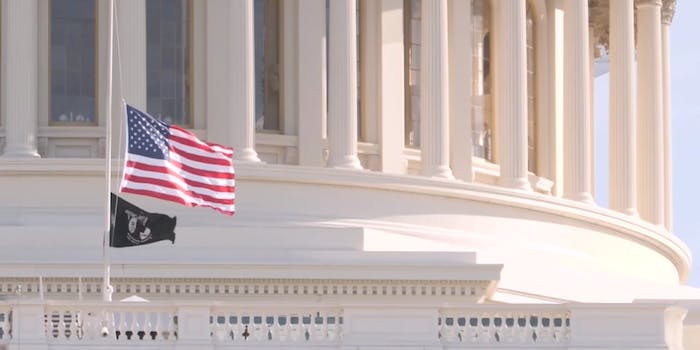 Questions surrounding Brian Sicknick's death are being used by some conservatives to downplay Trump's link to the Capitol riot.

The death of U.S. Capitol Police Officer Brian Sicknick is now at the center of an ideological battle over how much responsibility former President Donald Trump holds for the insurrection in January in Washington, D.C.

Questions surrounding Sicknick’s death are being used by some conservatives to downplay Trump’s link to the violence at the Capitol on Jan. 6, spurred on by the spread of debunked claims that alleged widespread voter fraud in the 2020 election.

But are there legitimate questions surrounding Sicknick’s final hours, or has his untimely death become a political football? And do the details of his tragic passing ultimately make a difference in light of the actions that unfolded in the halls of government?

An article from the right-wing media outlet Revolver attempts to make the case that Trump supporters are “being blood libeled with a felony murder charge in the court of public opinion” over Sicknick’s death.

The argument revolves around the fact that initial reporting, based on the claims of two law enforcement officials, indicated that Sicknick died after being bludgeoned with a fire extinguisher. Yet the claim, which was widely cited by media outlets and politicians alike, is no longer being supported.

As reported by CNN earlier in February, federal investigators struggled to build a credible murder case after medical examiners found no evidence that Sicknick sustained any blunt force trauma.

Sicknick didn’t die on the scene of the riot either. He collapsed in his office later that day before passing away on Jan. 7. Before collapsing, the officer even texted his brother, Ken Sicknick, and stated that he was in “good shape” despite being pepper-sprayed by insurrectionists.

Investigators are now considering the theory that Sicknick may have suffered a fatal reaction to the irritants, including pepper and bear spray, being used against officers during the riot.

Based on video evidence, investigators have also reportedly narrowed down the number of potential suspects in the death of Sicknick to just a handful of individuals.

Undoubtedly, more details are needed to determine what exactly led to Sicknick’s collapse and eventual death. The suggestion by Trump supporters that Sicknick’s fate was somehow unrelated to the events at the Capitol seem highly unlikely.

But the general complaints against the media regarding the haphazard reporting of Sicknick’s situation are not unwarranted. A communication breakdown clearly took place somewhere between sources, reporters, and official statements. The notion that the media purposely lied to fit a narrative—the same media that provided outlets like Revolver with all the information they needed to make their criticisms, to begin with—is untrue.

At the end of the day, facts still matter. Finding out what happened to Sicknick matters. Correcting the record about the incorrect claims surrounding Sicknick’s death matters.

None of those valid criticisms take away from what happened at the Capitol, though. The specific details surrounding Sicknick’s death are important but do not change the fact that thousands of people, egged on by the most powerful man in the world, attempted to violently overthrow the democratic process.