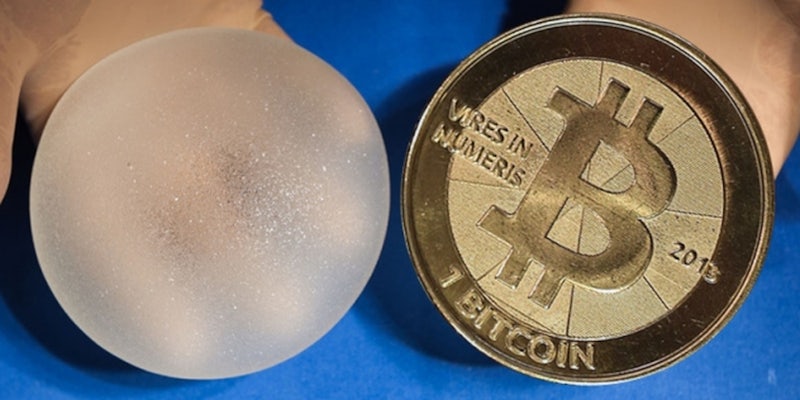 Bitcoin’s value exploded this week after the Department of Justice and Securities and Exchange Commission acknowledged it as “legitimate” currency. As the booming business of a new Bitcoin ATM in Vancouver adds further authority to the difficult-to-trace cybercurrency, other industries are getting involved: In Miami, you can now use Bitcoin to pay for a boob job.

Vanity Cosmetic Surgery, a South Florida company, is now accepting bitcoins as payment for services. According to their website, patients “can now use their loaded Bitcoin account to pay for a breast augmentation or a nose job, or maybe a laser hair-removal treatment. This will definitely transform the way people will choose their doctors in the near future.”

They go on to say that Vanity is currently the only medical establishment to accept Bitcoin as official payment, and that it “benefits anyone, especially foreigners who do not want to exchange their currency for U.S. dollars, who already have a Bitcoin account.”

Carlos Yela, Vanity’s media liaison, told Bitcoin Magazine that he came to the Bitcoin discussion a few months ago, and became more interested after seeing how China was utilizing it.

“I think that Bitcoin itself is revolutionary,” he said. “It’s a total new way of creating wealth and trade, and its growing popularity rate is so extraordinary.”

New patients will be able to pay 20 percent of their procedures with Bitcoin, while returning patients can pay the full amount with the virtual currency. There’s even a handy Bitcoin price list for services. Right now, a butt implant is only 9.43 BTC, which is something to keep in mind for the holidays.