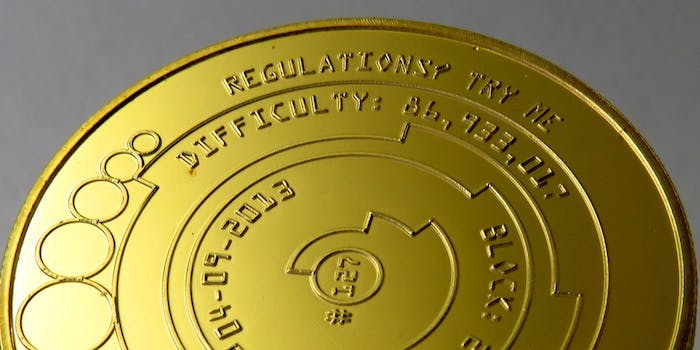 Bitcoin skyrockets to $600 after U.S. agencies label it ‘legitimate’

The news comes ahead of a Thursday Senate committee meeting on the currency.

The Department of Justice and Securities and Exchange Commission told senators that bitcoins are “legitimate financial instruments,” Bloomberg reports. The news comes just three days ahead of a U.S. Senate Committee on Homeland Security and Governmental Affairs hearing on Bitcoins.

Almost immediately following the article publication at 12:01am ET, the average price of Bitcoins jumped over $50, from $495 to $554, sprinting past the $500 milestone. It has continued to climb to a $583 average in the hours since. At Mt. Gox, the largest Bitcoin exchange, the currency is already selling for $630.

The Senate committee, which was scheduled immediately following the fall of the Deep Web black market Silk Road, aims “to explore potential promises and risks related to virtual currency for the federal government and society at large.”

“Like any financial service, virtual currency systems of either type can be exploited by malicious actors, but centralized and decentralized online payment systems can vary significantly in the types and degrees of illicit financial risk they pose.”

Ben Bernanke, the chairman of the Federal Reserve, said he had no plans to regulate the currency. In fact, Bernanke isn’t sure if the Fed even has the authority to do so.

In an article on Sunday, Time reported that the Senate hearings were “just the beginning.”

“Honestly, the environment seems to be a game of hot potato where no politician wants to be caught being pro or anti bitcoin,” Charles Hoskinson, director of the Bitcoin Education Project, told the magazine. “Once the market cap gets to around $10 billion or so, then expect real hearings and a lot of lobbying.”

At nearly $7 billion and triple what it was just two weeks ago, the cap is closing in fast on Hoskinson’s milestone.

The reaction in the Bitcoin world has been ecstatic. After similar reports of Chinese authorities saying the government has no plans to regulate the digital currency, news that the U.S. is following suit is exactly what Bitcoin-backers had hoped for. Around the Internet, bitcoin enthusiasts talked about the adrenaline they felt watching the price surge this morning.

There is already widespread speculation in the community that the currency will soon enough reach $1,000—and beyond.