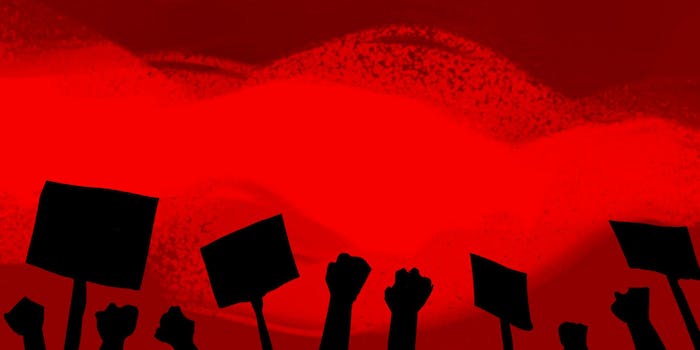 Protests grow outside the capital building as lawmakers return from break.

Monday saw protests and petitions galore, as lawmakers returned to the North Carolina statehouse in Raleigh for the start of the spring legislative session.

But while LGBT advocates shouted through megaphones on the capital steps, state representatives inside the building were staging their own form of protest against the state’s highly contentious anti-LGBT law, HB2.

On Monday morning, a coalition of Democrats filed House Bill 946—which would repeal the controversial law and reinstate any local nondiscrimination or minimum-wage ordinances that were effectively blocked when Gov. Pat McCrory signed HB2 into law in late March. The bill also calls for a reappropriation of $545,407 from the state’s general fund to go toward operating expenses at the Human Relations Commission.

At a press conference announcing the repeal effort, Rep. Ed Hanes explained his decision to sign the new bill in response to the growing number of boycotts from national businesses, like Paypal, that threaten to cripple the state.

“I’m actually stunned at the doubling down by our governor in the face of rebuke by businesspeople within his own party,” Hanes told reporters, who went on to state that even Donald Trump voiced opposition to HB2.

According to Raleigh’s News & Observer, the group of lawmakers who pledged to vote for the repeal bill includes at least one state representative—Rep. Billy Richardson—who originally voted for HB2 and later said he’d made a mistake.

While the repeal bill currently does not have any Republican supporters, House Speaker Tim Moore issued a statement assuring that House Bill 946 “will be assigned to committee and will be treated the same as any other bill that is filed.”

Also on Monday, Moore tweeted a photo and thank-you message to the counter-protestors who flooded the capital in support of keeping the conservative HB2 in place.

It was a privilege saying hello and thanking the huge crowd in Raleigh in support of #HB2 #ncga #keepncsafe pic.twitter.com/CdiusfGR9z

Primary HB 946 sponsor Rep. Darren Jackson initially promised on March 28 to file a repeal effort, also circulating a petition directed at Gov. McCrory. In a statement posted to his website in late March, Rep. Jackson said North Carolina should not be “first in public ridicule.”

“There is simply no place for discriminatory legislation like House Bill 2, if North Carolina wants to continue to grow, protect its reputation nationally, and recruit major companies to locate here,” wrote Jackson.

In a tweet on Monday, Rep. Jackson said that HB2 “wiped out” North Carolina’s reputation as an inclusive and business-friendly state.

Protests continued Monday after the new repeal bill was submitted. On the statehouse steps, a rally brought speakers from the LGBT community as well as religious leaders who railed against the discriminatory law.

A simultaneous rally in favor of keeping HB2, organized by the “Pro Marriage, Pro-Life, Pro Religious Liberty” group NC Values Coalition, appeared to be much larger than the anti-HB2 protest.

View from the podium of the now over 4000K pouring in to Halifax for their lunch breaks. #StandWithNC #Hb2 pic.twitter.com/f8JDfHls1l

Around noon on Monday, protestors staged a sit-in blocking the entrance to Gov. McCrory’s office. The anti-HB2 protestors began by singing religious hymns at the capital rotunda, then sat down in front of the office entrance and refused to move.

#HB2 protesters singing in the rotunda of the state Capitol building, outside McCrory's office. #ncpol pic.twitter.com/6ZS3NWfiNU

Two of the sit-in protestors were invited to meet with Gov. McCrory’s chief of staff, Thomas Stith. United Church of Christ pastor Julie Peeples and Cosmos George of the local NAACP told reporters they urged the governor’s staff to endorse the NAACP’s proposed Human Rights Act of 2016 and repeal HB2. “We are asking the governor to take leadership in reversing the hate and the fear that has been created by HB2,” Peeples told the News & Observer.

According to News & Observer reporter Colin Campbell, the sit-in was cancelled shortly after when protestors realized that lawmakers were unlikely to attempt entry until after 5pm, when the short evening legislative session is scheduled to take place. Since no symbolic arrests would be made, the sit-in group decided to disperse and attend the rally outside.

The protests were scheduled to continue into the evening Monday, with at least one more sit-in planned—according to the LGBT advocacy group Southern Equality. As of 3pm, no arrests had been made.