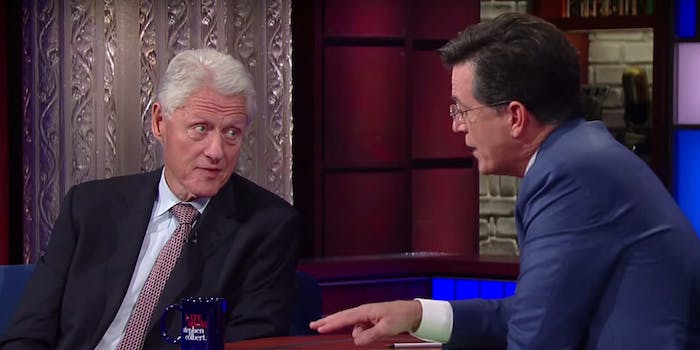 Clinton also addressed the rumor that he encouraged Donald Trump to run.

Bill Clinton may already be on Team Hillary for the 2016 election, but he still has many insights about some of the other presidential candidates.

Donald Trump and Bernie Sanders are both the talk of the political town right now, and while Trump has been leading the polls for some time, Sanders has taken people by surprise by catching up to Hillary Clinton. Because Stephen Colbert has already interviewed both Trump and Sanders on The Late Show, he asked Tuesday night’s guest, former President Clinton, why they were doing so well.

To Clinton, it was simple. Sanders is the Democrats’ answer to Republicans’ rightward shift, while Trump—whom he called a “master brander”—appeals to frustrated Americans as someone who says he’s going to get things done.

As far as the rumor that Clinton encouraged Trump to run? The former president tells a very different story, although he does say he gets “credit for a lot of things I didn’t do.” But if he had, as Colbert noted, it would’ve been pretty smart of him to do.