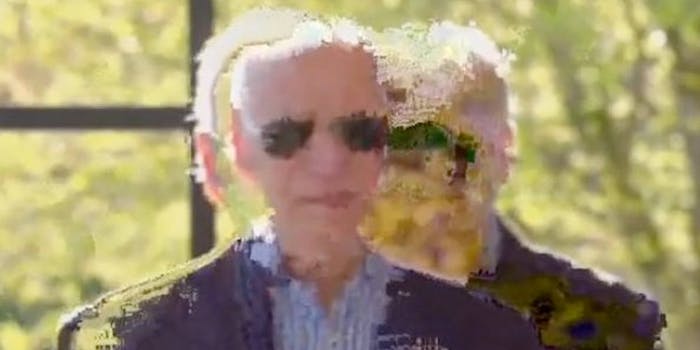 'They introduced me? Am I on?'

While trying to gain support for his presidential run from voters in Florida on Thursday, Biden inadvertently horrified the internet after glitches during the event appeared to disfigure his face.

The nearly hour-long rally began with politicians such as Rep. Charlie Crist (D-Fla.) and Rep. Kathy Castor (D-Fla.), both of whom’s audio was seemingly affected by connectivity issues.

When Biden finally appeared on camera around 40 minutes into the rally, the Democratic candidate appeared momentarily confused.

“They introduced me? Am I on?” Biden asks.

“Good evening. Thanks so much for tuning in. I wish we could have done this together and it gone a little more smoothly, but I’m grateful we’re able to connect virtually and thank you…” Biden said as his audio became unintelligible.

But it wasn’t Biden’s poor audio quality that mortified viewers. It was the visual glitches that morphed the 77-year-old’s face.

Many noticed the similarities between Biden’s glitch-ridden appearance and that of Mason Verger, a fictional character from the 2001 film Hannibal.

Users created their own adaptations of the digitally-massacred face as well.

The rally’s monumental failure was just too tempting to pass up for some.

Unsurprisingly, the event was also mocked by Republicans from the Sunshine State.

“Problem with @JoeBiden is you can’t tell if it’s a bad feed during his virtual Tampa ‘rally’ or if he just sounds that way,” the Florida GOP said.

Unfortunately for Biden, Thursday’s rally is just one problem of many for the campaign. Aside from sexual assault allegations, Biden can’t seem to go more than a few days without giving a gaffe-filled speech.