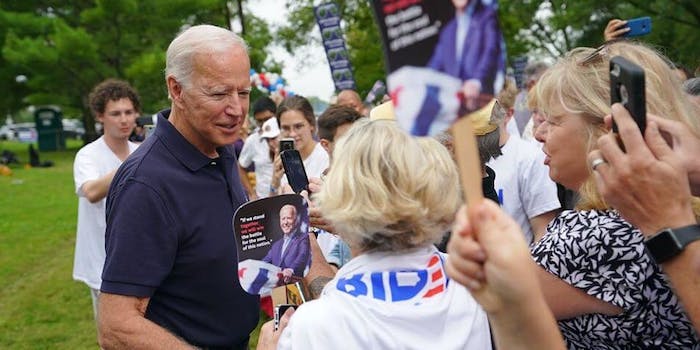 In an effort to make up ground in the digital campaign, Joe Biden’s team is courting an extremely specific voter: suburban Facebook empathy moms.

Rather than be strictly combative, the campaign is choosing a softer approach that they believe better reflects elements of Biden’s character, to draw in supporters of the presumptive Democratic presidential nominee.

Unlike Trump, who appeals to online rage-aholics, they see Biden as appealing to the softer side of the internet.

“Empathy is just as good at getting engagement,” Biden’s digital director Rob Flaherty told Politico. “The suburban Facebook empathy moms that we think about a lot, those folks are just hungry for the contrast between the darkness of Donald Trump and the goodness of Joe Biden.”

Flaherty added that, while algorithms reward bad behavior, the campaign is looking to create an enthusiastic following that isn’t driven by negativity, which they believe will help drive support among women voters.

To accomplish this goal, they’re focusing on what is essentially an updated version of the 1990s soccer mom: the suburban Facebook empathy mom.

To appeal to this very specific voter, the campaign has begun experimenting with content Politico likens to that found on Upworthy.

The campaign is so confident in this strategy that over the weekend it published a video montage of “Joe’s campaign code.”

Included in the code are words like “compassion,” “humility,” “empathy,” and “respect”—none of which Trump is exactly known for, and all of which it likely believes will help capture this segment of the voting population.

This weekend, it hosted a “Biden brunch” video chat in which women from the campaign talked about their work.

Many women on Facebook have reacted favorably to the positive-first approach. “Biden 2020 see what leadership and compassion really is!” a woman commented on the brunch video. On another post, a woman commented, “Thanks for being so thoughtful about the female perspective.”

Flaherty’s quote about “suburban Facebook empathy moms” provided fodder for many jokes. Perhaps curiously, most mocking it were men.

“‘Suburban Facebook empathy mom’ was my nickname in high school,” said one man.

The campaign told Politico that its approach is starting to pay off. They said that digital engagement has doubled since February.