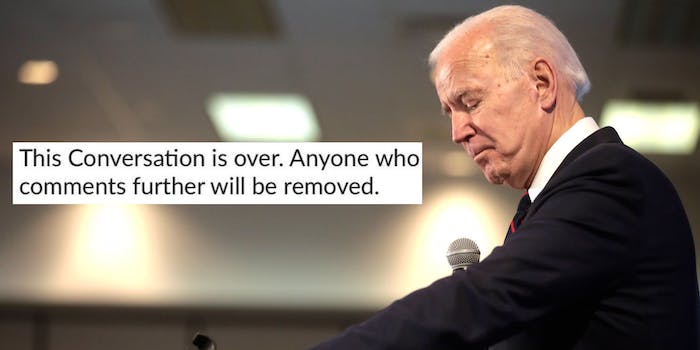 'This Conversation is over. Anyone who comments further will be removed.'

A series of screenshots posted to Twitter purport to show a staffer for Democratic presidential candidate Joe Biden threatening to ban users from a Slack channel who discuss sexual assault allegations against the politician.

The Slack workspace, set up for campaign volunteers, appears to have been inundated by users concerned about allegations from Tara Reade.

A former staffer of Biden’s during his time in the Senate, Reade has continued to make headlines after publicly accusing Biden earlier this year of inappropriately touching her in 1993.

A tweet highlighting an alleged back-and-forth from the channel shows staffer Ben Cobley asking users to stop discussing the controversy.

“Attention EVERYONE: This Slack workspace is meant for helping the campaign,” Cobley reportedly said. “Staff is here to answer legitimate questions regarding volunteerism – this question has been answered multiple times. You are welcome to go elsewhere to discuss this any further.”

The Daily Dot reached out to Cobley over Twitter to ask whether he would confirm making the aforementioned comments but did not receive a response.

Colbey did send out a tweet on April 30, however, highlighting a report from the New York Times in which the volunteer Slack channel is mentioned.

Other images show volunteers expressing their concern over the controversy, asking staffers in the channel to address the issue.

“This allegation is really concerning. As a sexual assault survivor who was actually beaten within an inch of my life, raped and left for dead – I find it extremely concerning,” a user known as Nicole says. “And with all the evidence, I’m enclined[sp] to believe women.”

Cobley at some point during the conversation is then alleged to have threatened the channel’s users with removal if the issue continued to be debated.

“This Conversation is over,” he said. “Anyone who comments further will be removed.”

While the images appear legitimate, the Daily Dot reached out to the Biden campaign as well to confirm their authenticity but did not receive a reply.

Biden responded to the sexual assault allegations for the first time on Friday by denying that he ever engaged in misconduct with Reade.

“No, it is not true, I’m saying unequivocally it never, never happened,” Biden said on MSNBC. “And it didn’t. It never happened.”

The presidential candidate’s remarks came just days after two separate people, an ex-neighbor and former co-worker, stated they had been told of the incident by Reade back in the 1990s.

The former vice president has requested that the National Archives make public any complaint that was filed while he was in office in order to dispel the claim.

Reade stated on Saturday that while she did file a report on her issues with Biden at the time, she declined to use the term “sexual harassment” and instead alluded to the politician’s alleged behavior as making her feel “uncomfortable.”

“I know that I was too scared to write about the sexual assault,” Reade told the AP.